3A FOOTBALL: Sabino cruised past Blue Ridge 38-6 in first round action

Sabino connected on several big plays against Blue Ridge including a 64-yard run from senior Jamel Brown on the first play from scrimmage and a 75-yard pass play from sophomore QB AJ Skaggs to senior Jimmy Hamilton to put the Sabercats up 14-0 heading into the second quarter.

Skaggs finished the game with 208 yards passing on 13 attempts and he added a 3-yard scoring pass to junior Jayson Petty and a 65-yard strike to Diego Armijo to put the Sabercats ahead 28-0 21 seconds into the second half.

Skaggs saw limited action earlier in the year when the Sabercats were still searching for a starting QB but he took off and cemented his starting role in a 21-17 win against Catalina Foothills in the third game of the season and he carried that 117-yard and two touchdown performance into a 14-7 win at Blue Ridge next following week. The Victory over the Yellowjackets evened up the Sabercat record 2-2 and it started a nine-game win streak including the rematch with Blue Ridge.

Skaggs is sitting at 1,323 yards passing for the year with 16 TDs but he’s going to need plenty of help to get past Snowflake Friday night.

The Yellowjackets had an up and down year and were 3-4 at one point with the fourth loss coming at home to Snowflake, 28-21. That close battle is sure to give the Sabercats some sense of hope.

Armijo added an interception to turn Blue Ridge away in the third quarter and junior Cameron Jacobs cashed in on the turnover with a 8-yard scoring run to put Sabino up 35-0 with 6:05 left in third. A 32-yard field goal from senior Johnny Atnip made it 38-0 but senior Chase Esparza rushed in from 18 yards out in the fourth quarter for the 38-6 final.

Esparza was the workhorse for the Yellowjackets and he finished with 146 yards rushing on 29 attempts.

The Sabercats are now one of five teams from Southern Arizona still alive in the postseason: 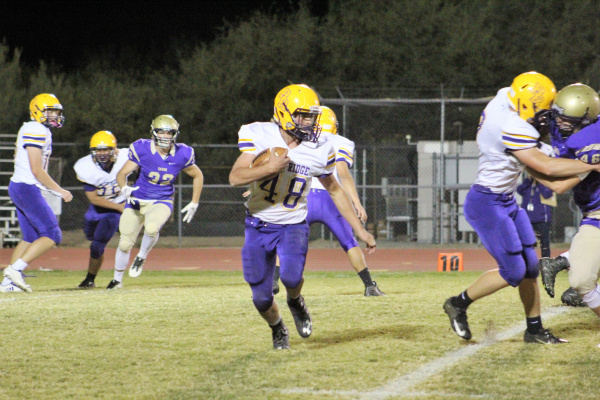