5A Softball: Willow Canyon survives with 11-10 win at Cienega

No. 9 Willow Canyon beat No. 8 Cienega 11-10 Tuesday to advance to the second round of the 5A softball playoffs. The win was but one note in an opera that wouldn’t be decided till the final pitch.

The Wildcats won their first game of the 5A playoffs last year which meant a trip to the elimination round, unchartered territory. That team was a mixture of mostly seniors, juniors and sophomores but the Wildcats sport seven freshmen this year with six taking part in most of the games. The result has been 24 wins, the most ever in program history.

“We call ourselves the Magnificent Seven,” Bella Serratos said. “The team is really close and we work really well together. The coach saw us coming in and we took the challenge.”

Serratos came in with one home run on her freshman ledger but she will head to the second round with another, a grand slam to be exact.

With the score tied 1-1, Bree Gonzalez blasted an RBI double to give the Wildcats a 3-1 lead in the top of the fifth and then Hanna Bowers singled. Gabby Sublasky reached on an infield error to load the bases for Serratos. Serratos hit a towering shot that hit the left field pole to give the Wildcats what appeared to be a comfortable 7-1 lead.

Willow Canyon led 1-0 early, with doubles from Mashayla Beltran and Jaeden Murphy leading the way in the top of the first, but the Bobcats had difficulty responding, mainly due to the pitching of another Wildcat freshman, Alannah Rogers.

Rogers held the Bobcats scoreless until junior standout Blaise Biringer singled in third, stole second and moved to third on an error where Breezy Hayward knocked her in to tie the game up 1-1. A single from Biringer, an RBI triple from Marisa Olvera and a sacrifice fly from Hayward in the bottom of the fifth cut the lead down 7-3 but Rogers was still working strong.

“I looked at each team and realized Cienega was our mirror image,” head coach Donnie Tizzano said. “I knew Rogers would keep them off balanced with her incredible changeup that she can throw with any count. She kept them off balance but Cienega is a good team for a reason.”

The Wildcats added three runs in the top of sixth, with another RBI double from Gonzalez leading the way, and another run in the top of the seventh on an RBI from Draya Rhinehart to make it 11-3. Still not a comfortable lead.

The Bobcats needed eight runs and the team only had three outs to get there. Double elimination starts in the second round. This was it.

“We battled back a few times this year and we came back to beat Sahuarita in a similar situation,” head coach Eric Tatham said. “Emily Rodriguez had the bat in her hands in that game and she hit a home run for us to win that game.”

Cienega was only down 5-2 heading into the seventh in that game but it proved almost anything was possible and the comeback against Willow Canyon started with a single from Hayward and a walk from Monica Hernandez. Rogers picked up a ground out but the runners advanced on the play and Jovanna Herrera singled in the first run of the inning to make it 11-4.

Senior Payton McLaughlin stepped in and came through with a 3-run shot to make it 11-7 with one out. Tizzano put junior Rachel Broussard in the circle and Kenzie Carson started things up again with a walk.

“I knew we had a realistic chance when Carson got that walk,” Tatham added. “It meant we were inching towards the top of our lineup.”

Broussard picked up an out and the Bobcats were really against the wall but Biringer responded with an RBI triple to make it 11-8. Olvera walked to put two on and Hayward double down the line to make it 11-10. Rogers returned to the circle and Hernandez reached on an error and Hayward moved to third on the play.

Rodriguez came up and hit a hard grounder but Bowers fielded the ball cleanly and threw to Gonzalez for the final out.

Willow Canyon is back in the second round and the Wildcats will host No. 16 Sunnyslope on Thursday, May 2. Sunnyslope upset No. 1 Sunrise Mountain 6-4 to set up the game.

“It feels really good and you have to believe in yourself,” Serratos added. “I’m glad I hit that ball.”

For the Bobcats, the loss of only three seniors means a possible deep run next year but Tatham sees a need for more pitching to get that done.

“Our pitching isn’t where it needs to be right now,” Tatham said. “We have some good talent coming in and I think we’ll be right back.”

“Pitching” was supposed to be one of the strong points for the Bobcats this year but no one could guess what would happen.

Mariah Lopez won 18 games a sophomore for Cienega last year, including a 2-1 semifinal victory over Centennial in the 5A playoffs and a championship win over Ironwood Ridge. Lopez is now a junior, pitching for No. 2 Centennial. The Coyotes are in the 5A second round.

Lia Dominguez went 10-1 last year for the Bobcats and she collected 10 wins this year but she is no longer part of the program as of three weeks ago.

Emily Maddux was the ace for the junior varsity team last year and she made her first appearance for Douglas three weeks ago and it was a no-hitter. Douglas is ranked No. 8 in the 4A playoffs and the Bulldogs are in the second round.

The result? McLaughlin was called into action and the senior’s only experience with the program was three innings as a freshman. Still, McLaughlin was able to pull of a 13-6 win over Ironwood Ridge in the final region game on April 18 to avoid the 5A Play-In Tournament.

For Tizzano, the second round will be another battle, even with Sunrise Mountain getting knocked out of the playoffs.

“Our team plays the same if they are eight runs up or down,” Tizzano said. “We could have easily lost this game but they didn’t get rattled. They never quit.” 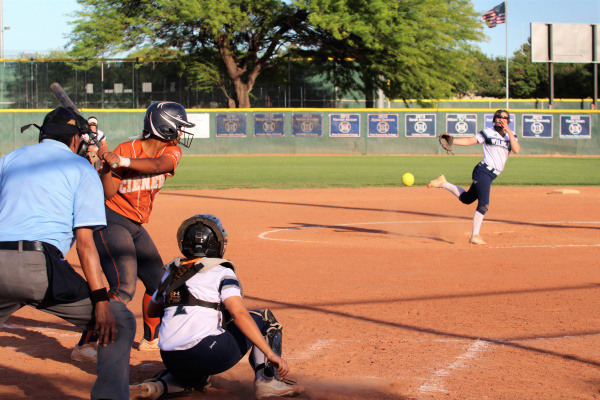