Alhambra's Daniel Avitia cools down after Gatorade shower and pitching Lions past Hamilton in 6A semifinals at HoHoKam Stadium. (Azpreps365 photo)

It wasn't a no-hitter, but the five-hitter Alhambra senior Daniel Avitia threw on Saturday night was good enough. Avitia used a three-run rally in the fifth inning from his mates to give him enough support in #4 Alhambra's 3-2 victory over top-seed Hamilton before a huge crowd at HoHoKam Stadium.

The win - the Lions' 14th in a row, in a 22-1 season -  sends them to the 6A championship game on Tuesday at 7 p.m. against #2 Liberty at Diablo Stadium. Liberty advanced in the earlier semifinal with a 9-3 win over #6 Sandra Day O'Connor. It's Alhambra's first trip to a championship game since it won then-named D-III in 2016 against San Luis. That title is the only baseball crown in school history. Hamilton's bid for a shot at an eighth state title fell short with the Huskies finishing 20-3.

The game lived up to expectations with Grand Canyon University-bound Avitia matching up against Hamilton lefty and LSU-bound Brock Selvidge. Both matched zeroes for four innings with Avitia posting the cleaner work (one hit allowed and seven strikeouts.) Selvidge worked harder to keep the game scoreless in that span, allowing two hits, five walks and six Ks.

Alhambra broke through with its bats in the fifth as the game's meager scoring began. The Lions lashed three consecutive hits off Selvidge. A single by Eder Vargas, double by Erubiel Ortiz and two-run double by catcher Jose Romero began the rally and ended Selvidge's night. Junior Kole Klecker replaced Slevidge and fanned the first batter he faced. The last run of the rally, charged to Selvidge, scored on Adolfo Berumen's double. It would be the decisive run.

Hamilton answered with a run in the bottom of five thanks to a Luke Thiele double and Ryan Kucherak RBI-single. Selvidge cut the lead to 3-2 with an opposite-field homer to right leading off the sixth. Prince DeBoskie doubled with two outs, but Avitia secured the final out to keep the damage to one.

Avitia tossed a 1-2-3 seventh to finish off the complete game and second tournament victory. He no-hit Sunnyslope in the first round, 1-0, a week ago. 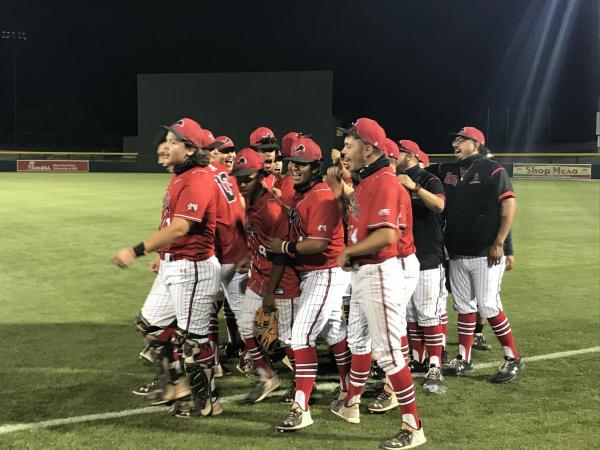 "We knew the game would be something like this," Alhambra coach Shea Clark said. "Avitia was going against one of the best teams and programs in the nation. He was the best guy tonight, and I think he's the best pitcher in the state. We hoped we could have an inning or two we might get to Selvidge and we did  make it happen in one."

Selvidge's pitch count was rather high by the time the fifth inning arrived.

"They got to Brock that third time through the lineup," Hamilton coach Mike Woods said. "I was impressed by Alhambra's approach. Even when we got to two strikes they were able to foul pitches off. Brock's command wasn't great, but he always competes....

"Avitia is all he's cracked up to be. They play with great spirit and a did a great job. I was proud of our boys fighting until the end."