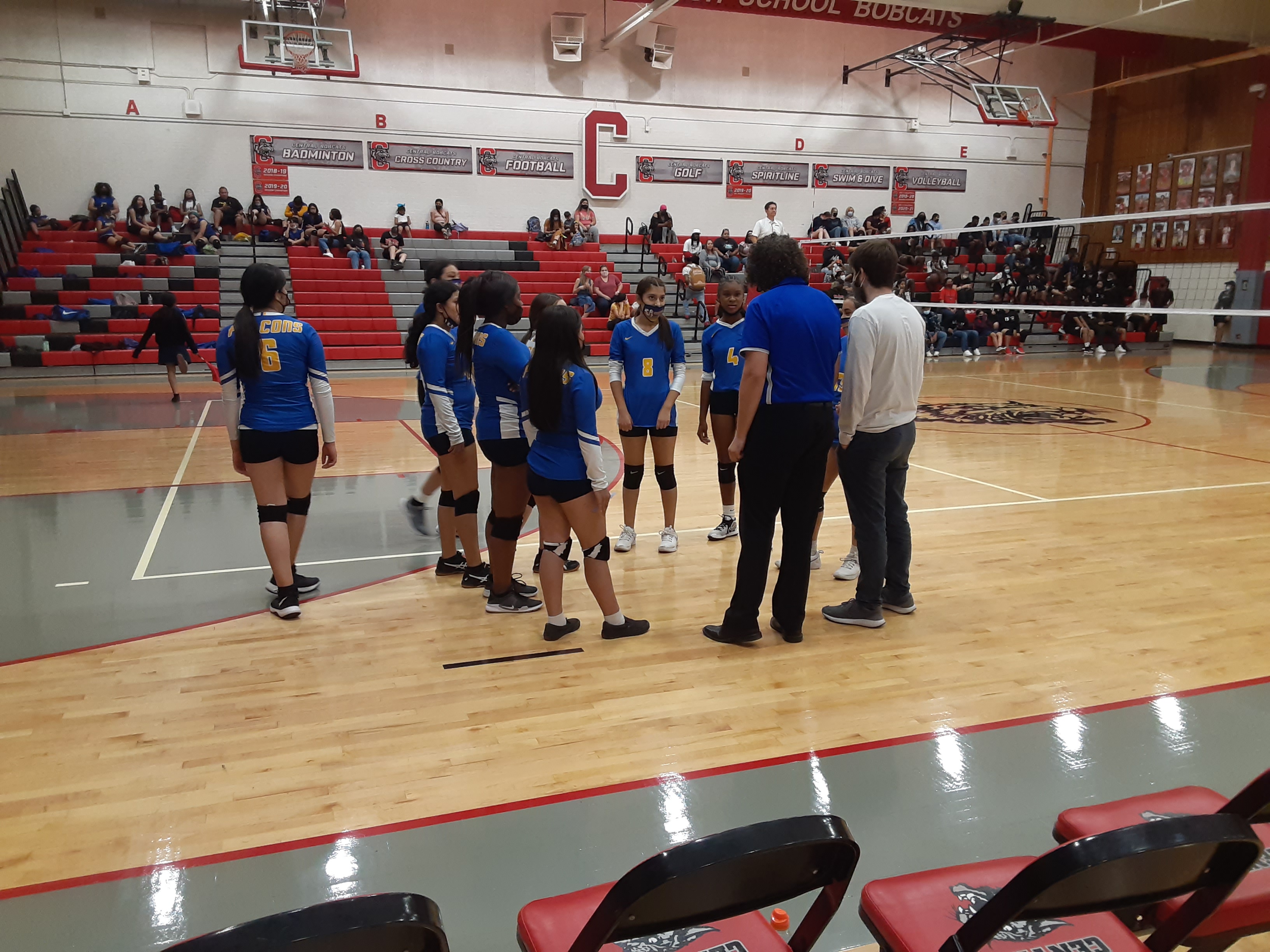 The Carl Hayden volleyball team huddles up after winning their first set of the season on Wednesday, Sept. 22. (Jesse Brawders / AZpreps365.com)

There was a feeling around the Central Bobcats gymnasium that this was a game circled on both teams’ calendars. Both volleyball teams had strong stretches, but Central’s consistency led the Bobcats to a 3-1 win over Carl Hayden on Wednesday.

The win gave the Bobcats their first win of the season, after dropping their first eight games of the 2021 campaign.

This was the first region game for the Falcons, who fell to 0-7 with the loss. The Bobcats captured its first region win  after losing to Metro Tech 3-1 on Sept. 10.

The second set was more of the same for the Falcons. They were able to stay right with the Bobcats for the first third of the set, but Central went on another mid-set run, bringing the score to 20-14.

The Falcons, however, continued to fight, and brought the set to 22-19. But after a few long rallies, Central was able to take back control and win the second set 25-22, bringing the series to 2-0.

This was not unfamiliar territory for the Falcons, as they regrouped and put on a set to remember. After falling behind 11-4, they slowly fought their way back, eventually tying the set at 21-21.

Captain Andrea Hinojosa led the team in the final rallies, winning the set 26-24, and clinching Carl Hayden’s first set win of the season.

In the fourth and final set, the Bobcats went on an early surge, and never let the Falcons back into the game. A 10-point run from Central, led by Kayla Bedonie, allowed the Bobcats to build a comfortable lead of 20-7.

The Bobcats went on to win the set 25-13, clinching their first series win of the season, and improving their region record to 1-1.

Central had several players who were ineligible to play in the game due to failing grades, according to head coach Laura Phillips. Some underclassmen from the JV team joined the varsity roster for Wednesday’s match and impressed Phillips.

“(It) opened my eyes to some underclassmen who have good varsity potential,” Phillips said.

Phillips could not comment on when the ineligible players could return, but noted that she is interested in playing some of the new players more in the meantime.

For Carl Hayden, it was the fundamentals, including taking care of their serves, that let them down during key moments in the game, according to head coach Andrew Scott.

To Michelle Martinez and the Falcons, winning their first set of the season was a huge relief.

“It felt really good,” Martinez said, adding that it was something she was not going to forget for the rest of the season.

Martinez and Scott both echoed that they will take the momentum and confidence gained from this game into the rest of the week.

“Next time, we will carry that energy into the fourth and fifth sets,” Scott said.

Carl Hayden will be on the road again on Thursday, Sept. 23, as they take on the La Joya Lobos. Central next plays at home against Sierra Linda on Sept. 28.