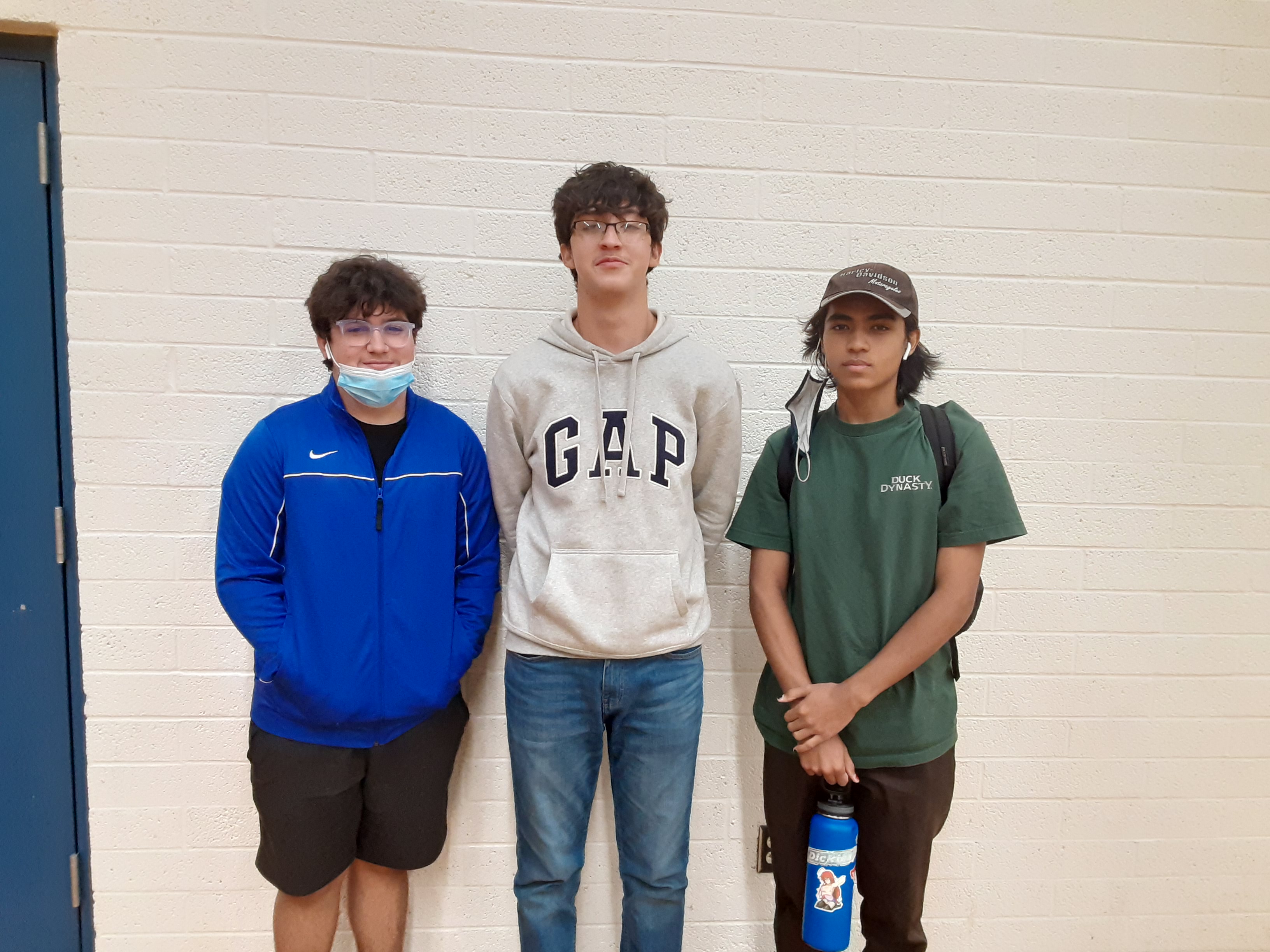 From left, Damien Urquidez, Alexis Hermosillo, and Chham Chet, are the student managers for the Carl Hayden girls volleyball team and also play for the boys team in the spring. During their offseason, all three help out the girls team in all facets of the game. (Jesse Brawders/AZpreps365)

Some athletes will chase every chance they can get to be around the sport they love. The student managers of the Carl Hayden girls volleyball team have done exactly that this fall.

Throughout the season, Carl Hayden students Chham Chet, Alexis Hermosillo and Damien Urquidez have assisted head coach Andrew Scott and the Falcons. Their passion for the sport has helped the girls volleyball team on and off the court.

The three boys are all current students at Carl Hayden, with Chet and Hermosillo in their sophomore years and Urquidez a junior.  All three joined the support staff this fall, mainly due to their passion for volleyball and Carl Hayden.

“I played volleyball last year and was interested in anything volleyball related, so I saw that there were spots for managers and I joined,” Chet said.

All of them have played on the boys volleyball team throughout their time at Carl Hayden, with Chet and Hermosillo both entering their second year and Urquidez entering his third year with the team.

Scott accepted all three of the young men with open arms and could see their love of the game.

“They’ve all done it in all of their years at [Carl] Hayden,” Scott said. “They were excited to be a part of the boys program and they love the sport so much that they decided to come out and help out as managers with the girls.”

Their normal responsibilities include setting up for games, keeping track of statistics and playing on the other side of the net during practices. But for Scott, there is one job that rises above the rest.

“They give some guidance when the girls need it,” Scott said, adding that their experience has helped give the girls a different perspective on the game.

The addition of Chet, Hermosillo and Urquidez has helped everyone involved, according to Scott. He said the players have less to worry about and can focus on improving their own skills and warming up, while the coaching staff can focus on their last-second preparations for each match.

“They get a new perspective on the game, because normally they are in the game playing, they learn the rotations, they are thinking about their specific role.  But I think that by helping with the girls, they get to see how it all comes together,” Scott said, adding that he hopes that they can take this new knowledge into their season in the spring.

According to Chet, one of the benefits of being a student manager is getting to know all of the girls on the team.

During the Falcons’ match on Oct. 12 against Sierra Linda, Chet, Hermosillo and Urquidez helped with almost every facet of the game: setting up the nets, working with the girls during their warmup drills, giving advice during timeouts and keeping statistics.

Their impact may not be noticed by spectators, but their effort has helped the Carl Hayden girls volleyball team improve throughout the season.

All three plan on playing for the boys volleyball team this spring for the Falcons and have their eyes set on another great season.