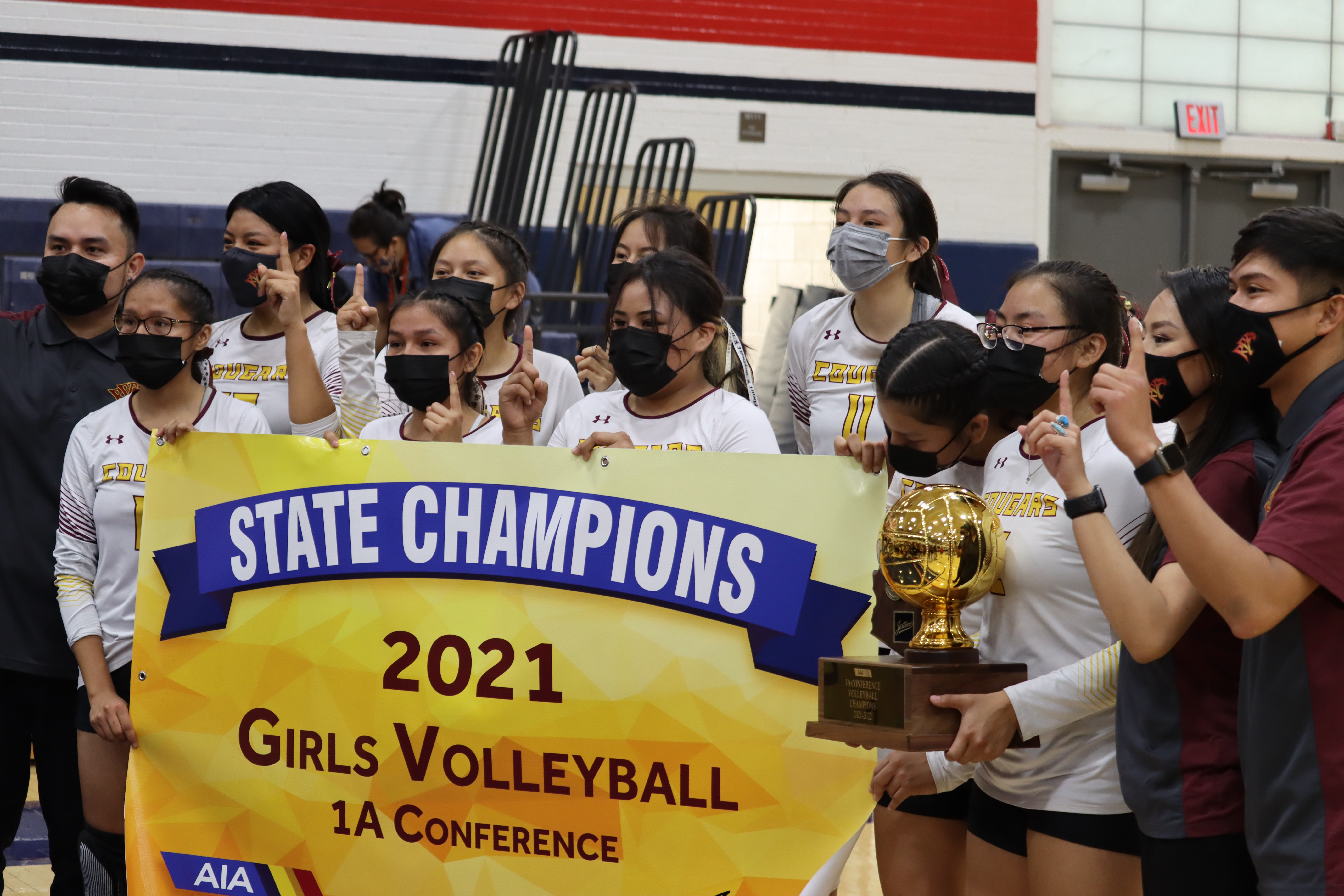 Rock Point proved that it's more than just a basketball school. Photo by Jose Garcia/azpreps365.com

As soon as the official lowered the red flag signaling the ball was in, Rock Point was given the green flag to begin its championship victory lap.

But it wasn’t the only volleyball team that deserved to be applauded.

Tempe Prep and Rock Point each gave championship efforts during their two-hour plus clash at Coronado High School. On the fourth match point of Saturday’s stirring Game 5, Tamira John’s kill landed just inside the left corner to clinch the 9-25, 25-23, 25-20, 23-25, 18-16 win for Rock Point in the 1A Conference final.

The tournament’s top seeds won their semifinal matches earlier in the day but still played at a high level later on in the afternoon. After the final whistle, Rock Point and Tempe Prep were clearly spent as they fell into the arms of each other to congratulate and console each other.

“I felt relieved and happy and shocked at the same time,” John said. “To be honest I didn’t think we would be able to go this far at the beginning of the year. I was really nervous when I hit that (last) ball.”

Tempe Prep fought off two match points in the final set and earned a well-deserved match point of its own after an ace by senior Julia Cady, the 21st ace of the match for Cady’s team.

But a kill by the very determined Arianne Begay of Rock Point tied it at 15 all. A Tempe Prep hitting error, a long rally resulting in a point for Tempe Prep and another kill by Begay followed to set up the final match point of the game.

Senior Shelby Chee’s final set of her career went to the outside to the player everybody in the gym probably expected to receive the pass, John, the tallest player on the court.

John then added the final touch to the fifth set and Rock Pointe’s revival. The program, located on the Navajo Reservation in northeast Arizona, didn’t play last year during the pandemic.

John and Begay each said after the match that they were also playing for the seniors on last year’s team who didn’t get to play. This season, Rock Point, which reached the 1A semis two years ago, was on a mission to prove it could continue winning and that it’s not just a basketball school.

“I believe we set up our younger kids to believe in a sport other than basketball,” Rock Point coach Kyle Arthur said about his 31-1 team winning the program’s first volleyball title. “We can do it in volleyball too.

We want longevity in the program.”

Tempe Prep was gracious in defeat.

After receiving the 1A runner up trophy, the smiles returned as the players were congratulated by family and friends.

“We pushed them as far as we could,” Tempe Prep coach Natalie Rockwell said about her team. “We don’t cut kids. Everybody who comes out plays. This is my 18th season coaching volleyball. I’ve had this same group of girls for four year, and they don’t play club except for one player. And they have just risen to the occasion. They are so teachable and do so without question. They trust me, and they trust each other. And that’s the only reason we made it this far. We are like the little team with a big heart.”

Tempe Prep is moving up to 2A next season along with a freshman who excelled Saturday, Jasmine Garcia.

The team’s season kill leader helped keep her team in the match with her work on the outside and 10 kills. But senior Amy Gonzalez (13 kills) was lethal for Tempe Prep (26-5) from the outside as well with the help of four-year starting setter Eliana Couillard. 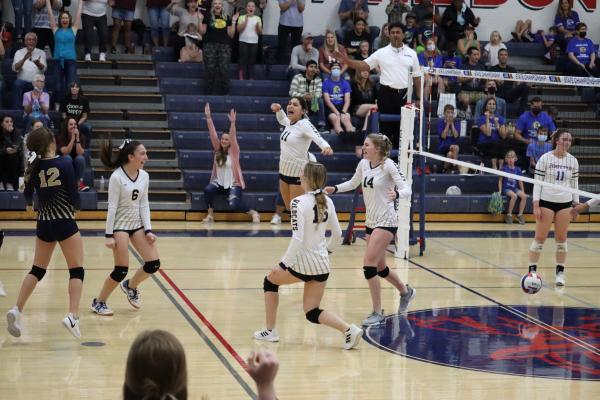 Tempe Prep celebrates after winning the first game of the 1A Conference championnship. Photo by Jose Garcia/azpreps365.comTempe Prep and Rock Point reached their first 1A final, but Tempe Prep played like it had been there before at the start with its strong serving. But Rock Point’s serve-receive game regrouped after that, allowing John (16 kills) and Begay (23 kills) to get going.

After the first game, it turned into a back and forth battle between the finalists all the way to the end.

Most of the girls on the volleyball team will suit up for their school’s basketball team in a couple of weeks. That program was the 1A champ two seasons ago.

“We are not done yet,” said Begay. 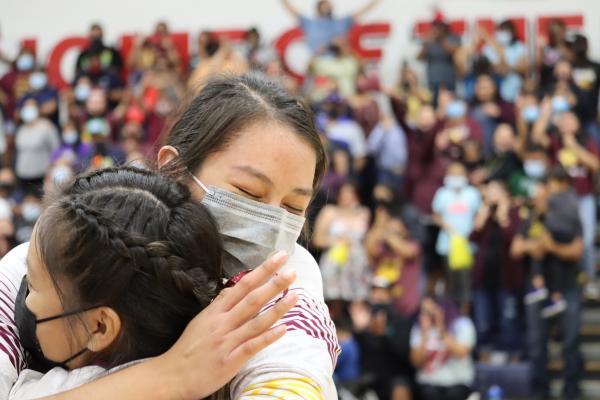 Tamira John (right) celebrates with a teammate after her final point clinched the 1A title for Rock Point. Photo by Jose Garcia/azpreps365.com.