Salpointe advances to 5A quarterfinals with 63-24 win over Sunnyslope 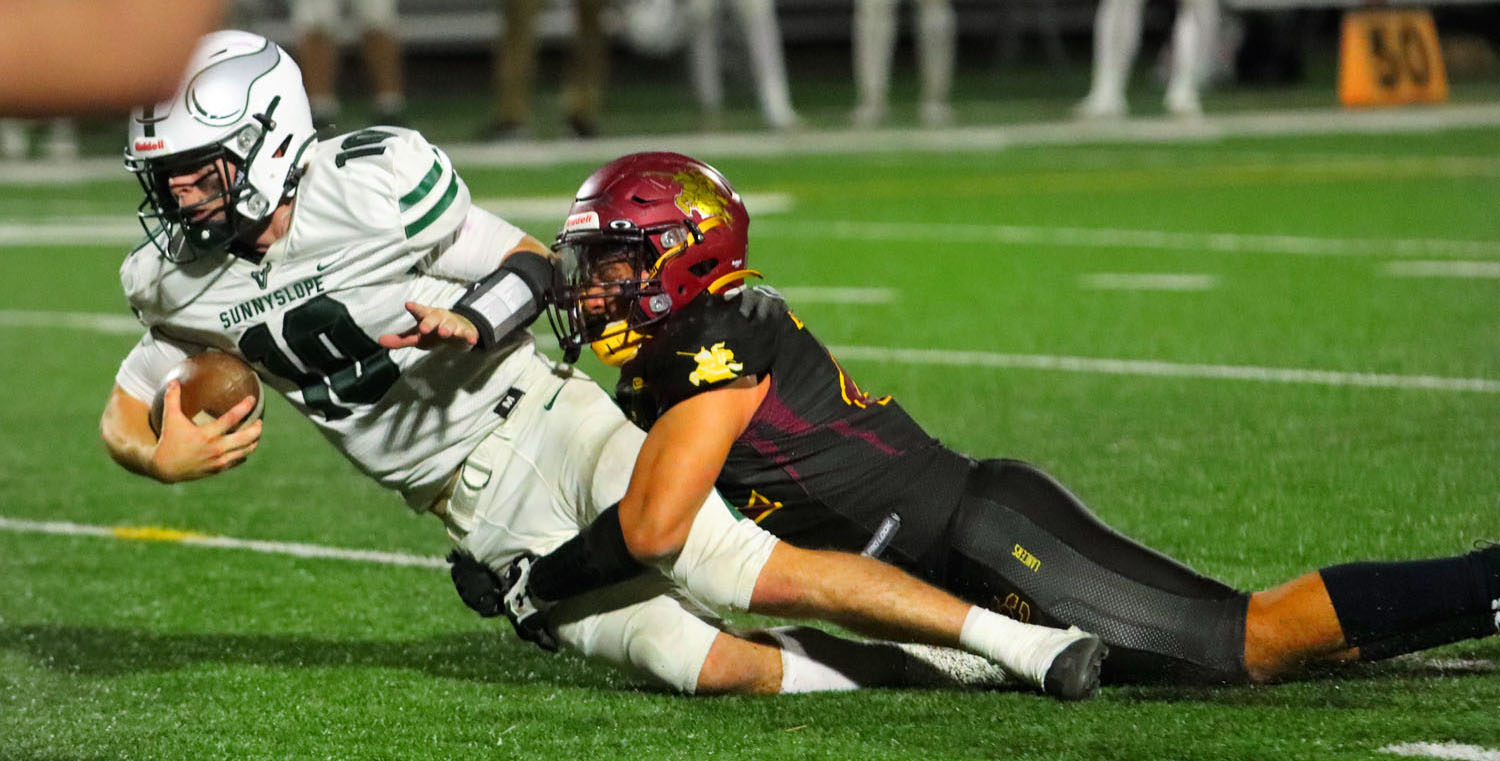 Davian Miranda Carrasco came up with a sack on Tanner Daoust. (Andy Morales/AZPreps365)

No. 2 Salpointe beat No. 15 Sunnyslope 63-24 Friday night at home to advance to the 5A quarterfinal round where the Lancers will host No. 7 Notre Dame Prep for a shot at the sixth straight semifinal appearance for the program dating back to 2016.

Salpointe improved to 9-2 on the year and the 63 points scored against Sunnyslope (6-5) was the most ever recorded in the playoffs in school history and the Lancers scored in a variety of ways to get the job done.

Anthony Wilhite scored three times from the backfield and the senior back got things going on a 49-yard run after the Lancer defense forced a Viking punt barely two minutes into the contest. Joey Sumlin followed another Sunnyslope punt with a 2-yard score of his own but a 43-yard field goal from Kyle Cunanan tempered things a bit with Salpointe leading 14-3 after one.

Wilhite scored again and Salpointe QB Treyson Bourguet hit Gage Felix from 33 yards out to build what looked like a safe lead at 28-3 with 6:29 left in the half. That lead looked especially good after Jaxson Greene returned an interception to put the Lancers up 35-3 30 seconds later but the Vikings came alive.

Luke Moga got behind the Lancer defense where Tanner Daoust found him for a 74-yard connection to cut the lead down to 35-10 and then Sam Woznicki found himself all alone behind the Lancer DBs and he scored untouched form 50 yards out to make the game a more manageable 35-17 contest at the half.

“We just have something really special on that defensive side of the ball,” Davian Miranda Carrasco said. “We know very well that that if we just do our assignments and do what the coaches teach during practice all week, and work hard, that we can really put up some great numbers.”

Carrasco mentioned communication as the key to overcome lapses like the two scoring plays by Sunnyslope but the defense responded when needed.

“We've always tried to improve on our communication, but that's something simple, but those things l can really affect us in the long run. We had two defensive scores, I believe, just some amazing plays, but that all falls back on the preparation of this week,” Carrasco added. “I just can't be more proud of that performance tonight, but we left some points up on that board, but next week we're just going to keep going at it, keep doing our thing and let's keep preparing to the best of our ability.

Daoust finished with 261 yards passing, connecting on 15 of his 30 attempts, but his two TD passes were offset by two interceptions and the Lancer defense made the necessary adjustments in the second half. 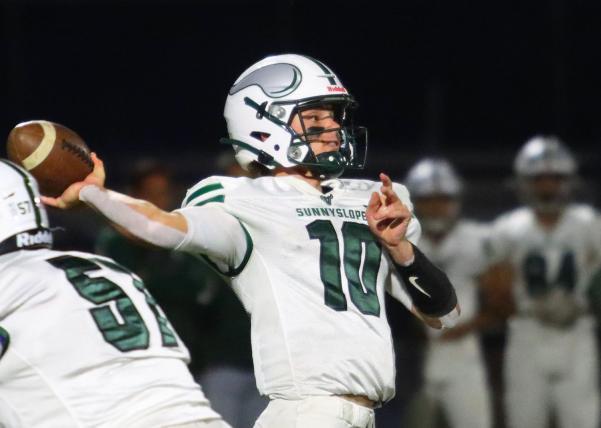 Wilhite put Salpointe back up 42-17 and then Sumlin picked up an interception to get the Lancer offense back on the field. Bourguet ended the night with 189 yards passing (13 for 19) and his second TD pass of the night came right after Sumlin’s interception. Michael Aguirre scampered 29 yards on the reception to put Salpointe up 49-17 with 5:18 left in the third quarter.

The game was once again out of reach for the Vikings and things got worse when Salpointe DB Conner Raetzman scooped up a fumble and returned it for another score to make it 56-17 with 3:25 left in the third.

“The ball took a perfect bounce and I wasn’t thinking about jumping on it, I honestly wanted to score,” Raetzman said on his fumble recovery.

The Vikings marched down the field and Daoust hit Xander Georgoulis on a short scoring pass to make it 56-24 but Bourguet found Dylan Dreis from 15 yards for the 63-24 final.

Wilhite closed in on 200 yards rushing for the first time this year and he passed the 1,000-yard rushing mark for the year in the process.

“We came in Saturday morning and got the rankings,” Wilhite explained. “Monday was one of the greatest practices we've had this whole season and our mindset, our focus today before the game was immaculate. It was amazing.”

Notre Dame beat No. 10 Glendale Apollo 56-21 to set up the quarterfinal at Salpointe next week and the Saints are one of the hottest teams in the state right now. The Saints beat No. 1 Horizon 38-21 in the final week of the regular season and that one victory may have caused a domino effect in the 5A Conference with the Saints earning a home game in the first round and dropping No. 9 Cienega out of the top eight ranked teams to make room for the Saints.

Beating Notre Dame will not be an easy task even with the game taking place in Ed Doherty Stadium but Wilhite knows what it will take.

“We need to work on discipline,” Wilhite added. “When we started getting up a little bit, we have more kids want to be heroes and make big plays, but we just have to stay disciplined, stay home, do this and that. Do your job.” 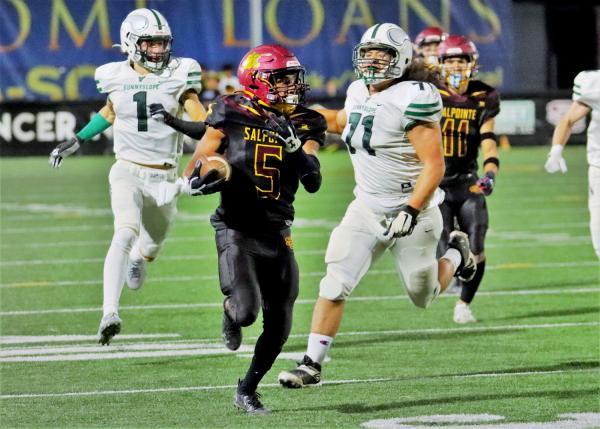 Jaxson Greene with the interception return for Salpointe. (Andy Morales/AZPreps365)