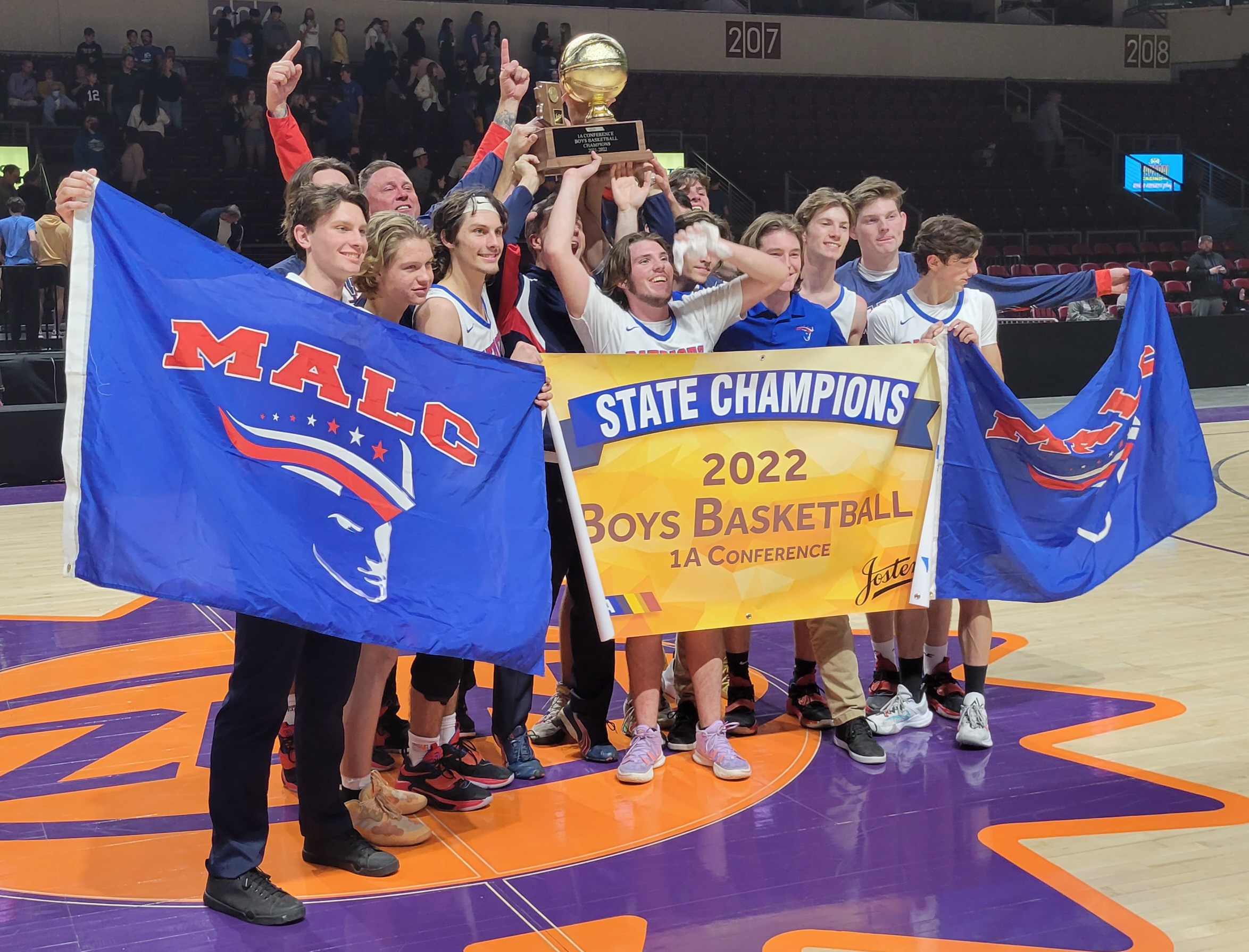 Mohave Accelerated Learning Center celebrates its first state championship in school history Saturday, Feb. 19, after pulling away from Tempe Prep in the fourth quarter for a 67-51 rout of the Knights. (George Werner/AzPreps365.com)

But after two of their closest wins of the season in the semifinals, nobody knew how either top boys seed Mohave Accelerated Learning Center or No. 2 girls seed Rock Point would respond in their state championship games.

The Patriots had never won one in any sport, while COVID-19 robbed Rock Point of its opportunity last season to defend the school’s first-ever championship from 2020.

“We had a chance to win [the] state title, back-to-back,” said Andrew Reed, winner of his second state championship in the last three seasons, 64-43, after coming up short in his first three years as Cougars head coach. “We lost a year of basketball [due] to Covid, so we [were] not taking things for granted.”

“Imagine wanting something for eight years and it finally coming true, from their Boys and Girls clubs to this moment,” said Patriots head coach Scott Neal after the 67-51 win over the Knights. “The biggest sigh of relief, to finally get it done.”

Neal credited junior forward Lucas Leslie, Honegger and son Josh, a senior wing, for providing the veteran experience and leadership necessary for the Patriots to mature as a team and virtually reverse their 17-point 1A championship loss to North Valley Christian Academy last season.

“They finally got that demon exorcised,” Scott Neal said. “Since the minute that bell went off to [when] this bell went off, they thought about it that entire time.”

After a three-point squeaker of a semifinal over fourth seed Mogollon in which the Patriots gave up 18 points in threes and another 18 rebounds just from Mustang senior Tyler Owens, Honegger credited he and Leslie’s defense with blowing open their two-possession lead in the championship’s final quarter–as well as something more superstitious.

While Honegger scored half of his game-high 24 points in a first quarter in which the Patriots doubled up the Knights, 16-8, it was 6-foot, 6-inch junior post Tyson Banks--leading scorer against Mogollon with 17--who “imposed his will,” his head coach said, to lead all fourth-quarter scorers and seal the championship with what Neal considers “our brand of basketball: tough inside rebounding and down-low play.”

Banks and Honegger, together, equaled the final margin of victory, combining for eight free throws with as many points from the field to turn a 44-38 lead at the end of the third into a rout for their 30th win overall this season.

“These kids, I could not be prouder of them, how hard they worked,” Scott Neal said. “We are bonded forever by this victory and this title for our school.”

While Tempe Prep senior wing Gabriel Huerta-McWhirter scored 20 in the first three quarters to shave a point off the Patriots’ seven-point halftime lead, he was held to a single field goal in the fourth quarter.

His co-captain, senior guard Tyrone Jordan, was held completely scoreless after a first-quarter three cut the Patriots’ lead to 20-15.

The rest of the Knights scored just six.

“The emotion that is inside of me, for these kids, will last a lifetime for me,” Neal added. “I will never forget them. They did our school and our area of Arizona proud.

“It’ll be something I’ll go to my grave with a smile on my face [about].”

Thirteen weeks prior, Tempe Prep was also a state runner-up in another sport: volleyball.

Out of that 18-16 comeback win in the 1A Conference title tiebreaker emerged Rock Point, with its first state title in program history, just the second for the school overall since it opened in 1935.

All but two of the 10 Cougars on that volleyball team also helped hoist the hardware home Feb. 19 from their second state basketball championship, one Reed called “outstanding.”

“History made for the second time at our school,” he said. “It’s never been done in history, so it means a lot to the players and the coaches.”

Particularly to six-footer Arianne Begay, that team’s co-captain, who led all scorers in the victory over Fort Thomas with 23. The junior wing was just a freshman her previous basketball season, when the Cougars edged the Apaches by four points in the semifinal prelude to their inaugural state title win over Baboquivari.

But Begay’s nine points outscored the entire Apache team in the first quarter Feb. 19, helping the Cougars duplicate Mohave Accelerated’s 16-8 score after the first eight minutes of their 1A championship and shut out the conference’s third-leading scorer and Player of the Year, sophomore guard Jasmine Olivar.

Then, after senior Chasinee Stanley’s second three-pointer in a row brought the Apaches back to within six, Begay’s late three-pointer sent Fort Thomas into the locker room down double digits, 32-21.

“My girls are playing like they never missed a year of basketball,” Reed said.   “I think [a] reason why my team is so successful is, they need  these five things in order to play on [the] varsity level: discipline, communication, commitment, dedication and chemistry.”

All qualities shared by that core of eight volleyball players, including the other captain–and the only Cougar taller than Begay–6-foot, 2-inch center Tamira John.

John, whose only three-pointer was the highlight of a 20-5 second-half Rock Point run–one which also gave the Cougars their first lead of 20 or more points midway through the fourth quarter–combined with fellow senior Shelby Chee for more than 30 points after a slow start.

That turned out to be three-quarters of the remainder of Rock Point’s offensive production, enough to ensure that jumpers by Olivar and Stanley wouldn’t get Fort Thomas any closer than eight points in the second half.

Three free throws by Chee capped the 21-point blowout after two straight baskets by her built the lead to 18 to start the fourth quarter.

“The beginning of the season, players have [to] fight for their spot” in the top 10 in Reed's rotation, he added. “It’s hard to believe, but every player on the team is [a] leader.

“Throughout the spring and summer, each player work[s] hard to condition themselves. I train my players so many different skills throughout the season to make sure we are ready [for] any team that we face up against, [whether] it’s 1A, 2A, 3A or 4A.”