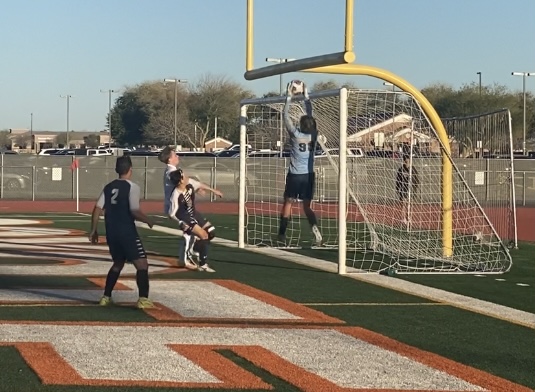 Desert Vista goalkeeper Aidan Klein (98) makes a save during the 6A semifinals on Saturday. (Stos Zafiropoulos / AZpreps365.com)

The roar of the crowd at Campo Verde High School echoed in the stadium on Saturday. Hundreds of people gathered on the bleachers, as the Hamilton Huskies took on the Desert Vista Thunder.

There was a lot of nervous energy inside the stadium, because the winner would move on to the 6A state championship against the Chandler Wolves.

Defense was a key factor in the first half when the Thunder had control of the game. Aidan Klein, Desert Vista’s goalkeeper, kept his team locked in, constantly telling his teammates where to be positioned defensively and making saves in the top corners, left and right.

Although the half ended scoreless, it was clear that the Thunder dictated the pace of play. However, that all changed at the start of the second half when Husky senior Gilberto Rivera hammered in a goal to give Hamilton a 1-0 lead.

The defense’s for both teams were dominant throughout the game, up until Desert Vista’s first goal by Micah Vasey, which tied the game at 1-1. Vasey shined bright when it mattered most.

“We had a great possession all the way up on those counter attacks,” Vasey said. “Both of those, we just had really good balls in, and I was just there to finish both of them.”

In the final eight minutes of regulation, both the Thunder and Huskies scored. Thunder senior Kaya Yildirim scored first, followed by senior Husky Vincent Acosta. At the end of regulation, the score was tied 2-2. The tension in the air thickened, as a couple players received yellow cards and both teams’ offenses were rapidly heating up. Then, they were off to overtime.

High school playoff overtime consists of two 10-minute periods and proceeds to penalty kicks, if the score is still tied. No matter the score after the first overtime, the second is still played. Husky senior Luke Schaefer kept the offense rolling with a goal near the end of the first overtime.

With a 3-2 deficit, Thunder head coach Trent Elliot encouraged his team to believe in themselves, “Believe in (what) got us here…we just got to believe in that and stick to that”.

With time not on the Thunder’s side, somebody needed to make a play fast. Junior Hayden Kos scored a wild goal in the middle of multiple Thunder and Huskies players. With the game tied at 3-3, all eyes were back on Vasey, when he scored the game-winning goal late in the second overtime. Emotions flooded the stadium, as Thunder players were smiling from ear to ear.

“This team is actually crazy dude; I love this team,” said Vasey. “Everybody on here is a special person. I love this team like my family, and taking home this win is unbelievable”.

As for the Huskies, their season feel short, but it was full of accomplishments. Senior Vincent Acosta is proud of their tremendous growth this season.

“We worked hard since the beginning of the season,” Acosta said. “We thought we could do it all this year, but it didn’t go the way we wanted”.