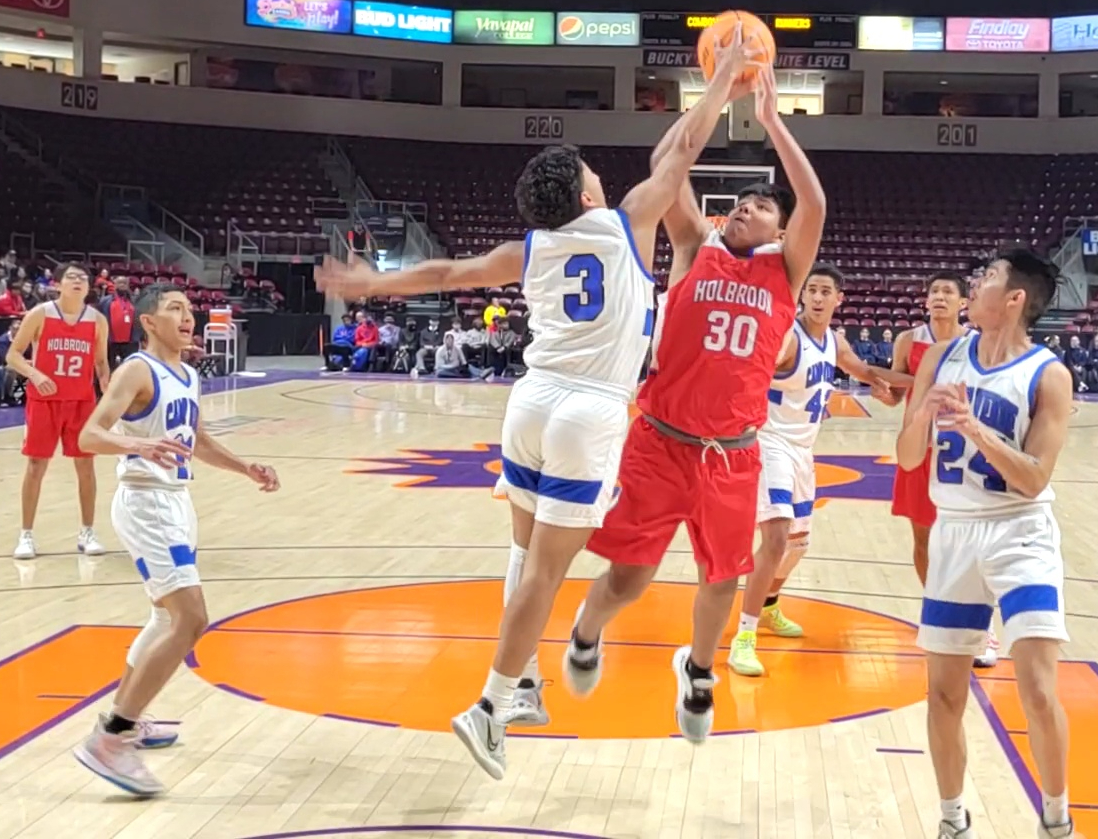 Holbrook freshman Tyler Tapaha hangs against Camp Verde senior Chino Salas-Zorrilla in the first half of the Roadrunners' 63-59 quarterfinal win over the Cowboys. (George Werner/AzPreps365.com)

The Madhouse on McDowell, Veterans Memorial Coliseum, is where Alchesay, Chinle and both boys and girls Holbrook teams have their final basketball destination as the 3A Conference semifinals play alongside the 2A boys and girls Final Four beginning at 9 a.m. Friday, Feb. 25.

Flagstaff, if the girls can successfully down ninth seed Shadow Mountain at home in the 4A semifinals, can make it five NAZ teams Thursday afternoon, Feb. 24, to successfully advance to the Coliseum.

The Eagles were never really challenged in 28- and 30-point postseason wins over Greenway and Poston Butte, respectively.

Red-hot Shadow Mountain has the elevation to deal with, but it remains to be seen if that will be more than a challenge than top seed Deer Valley was. The Matadors took down the previously-undefeated Skyhawks, 39-36, on their home court 16 days after Flagstaff’s first double-digit loss of the season there.

Whichever team advances to the 4A girls championship game Monday, Feb. 28, will be hard-pressed to equal the comeback intensity of the Holbrook girls and boys programs. The Roadrunners handed two of 3A’s top three teams just their second losses to advance to the Final Four as seventh and sixth seeds, respectively.

These upsets of No. 2 girls seed Gilbert Christian and No. 3 seed Camp Verde were not as surprising, considering all four teams were ranked atop the conference at some point during the regular season.

Feb. 11 losses to Snowflake dropped both teams from contention for the East Region title and top overall seed, but took nothing away from their furious full-court press nor their leaders at guard, senior Talynn Spencer and junior Noah Brown.

These are forces, among others from the 3A quarterfinals recapped below–with Northern Arizona results in bold–that will be impossible to ignore by the state championship games Saturday, Feb. 26. Here’s how they made the Roadrunners, Alchesay and even 12th-seeded Chinle girls semifinalists:

No. 7. Holbrook 49, No. 2. Gilbert Christian 40: Up 38-33 on the Roadrunners entering the final period, the Knights scored one field goal, then never scored again. Holbrook’s press surrounded Gilbert Christian junior Lilli Juve, who also had just one second-half field goal on her way to a game-high 17, sparking a 16-2 fourth-quarter charge to the upset. As was the case in another nine-point victory the previous round over 10th-seeded Eastmark, the guards led the way, but not just Spencer and her seven points–all in the fourth quarter. Sustaining the Roadrunners in the first half was another senior guard, Alyssa Yazzie, who bombed the Knights with four three-pointers, scoring 14 on the night. A third of Holbrook’s eight upperclassmen, Shand Footracer, added 10 points, all from the field, to offset the five field goals from Knights senior center Camryn Jones that was their only other offense in the second half.

No. 12. Chinle 58, No. 13. Monument Valley 55: In a season of split results between the North Region’s second- and fifth-place teams less than 69 miles apart, it was somehow fitting that the Mustangs and Wildcats met on a neutral floor for one final showdown after blowing out their play-in opponents, then taking out two of the conference’s top five seeds on the road. After scoring the Wildcats’ final four points to put away fifth seed Page in the second round, freshman guard Qoah Yazzie continued her clutch shooting with 11, including two fourth-quarter threes, to give senior forward Aisha Ashley just enough of a boost to overcome a 42-41 deficit to the Mustangs after the first three quarters. Ashley made a living from the free-throw line in the second half, hitting 10 of 14 overall on her way to a game-high 17 points. Junior Shyrai Shorty had 11 and senior Angel Holiday added 10 to both lead the furious third period comeback from a four-point halftime deficit and help upset fourth-seeded Snowflake on its home court in the Mustangs’ second-round matchup.

No. 6 Alchesay 71, No. 3 Winslow 52:  The Falcons ran away and hid from the Bulldogs in their second win over Winslow this season, leading 48-26 by halftime. Each team scored 17-point wins on their home courts over play-in winners, with Bulldogs senior guard Kylie Begay missing as few free throws as two- or three-point field goals–two–in a 20-point start to a torrid postseason, taking down No. 19 Tuba City. Alchesay senior Brandy Edwards, the team’s leading scorer at 14-and-a-half points per game, wasn’t even second in the scorebook against Winslow. Sophomore Jazlyn Nosie had 23 points and junior Jaylyn Nashio added 18 to relegate Edwards’ 16 to third–with none of those outdoing Begay, whose 20 points in the first half alone almost single-handedly carried the Winslow offense. Begay would hit six more second-half field goals to finish with 33 points, one of the postseason’s most prolific performances, which curtailed a Falcon third-quarter lead that, by its end, was at 27.

No. 8 Bourgade Catholic 44, No. 16 Show Low 36: In a tournament filled with upsets, none may have been as shocking as the Cougars’ freakish seven-point toppling of top seed Thatcher on its court Feb. 18. Although 20 points from Bourgade’s Briana Hernandez would reverse that result, especially in the Golden Eagles’ 15-8 third quarter, Cougars head coach Mike Brogan and his six-player rotation, including daughters Kinzee and Kyra, reminded everyone in Thatcher why the tournament is called February Frenzy. Kinzee and fellow sophomore McKenzie Kulish, who finished with 10 against Bourgade, will be up-and-coming talents to watch on both sides of the ball in the East Region next season.

No. 6 Holbrook 63, No. 3 Camp Verde 59: After a 17-0 start, the Cowboys lost two of their final three games–none tougher than to the Roadrunners, whom they led, 57-56, with a minute-and-a-half left in the boys quarterfinal. “We gave them too many easy post-up finishes,” said Cowboys head coach Dan Wall after the first of those losses, Feb. 11 to Fountain Hills. The same, however, could have been said throughout the loss to Holbrook, which found senior post Nick Begay for 16 points off drives deep into the key and multiple second-half offensive rebounds, despite being at a two-inch disadvantage to 6-foot, 4-inch Cowboys junior Chito Herrera–who was in foul trouble most of the second half and fouled out halfway through the fourth quarter. Taking subsequent advantage was Brown, despite being outscored by three by Cowboys senior Chino Salas-Zorrilla, who sank six threes and gave the Cowboys the lead late with another three-point play the old-fashioned way. Finishing with 24, he was there on the drive and on the full-court press when Holbrook needed him most. His steal and subsequent and-one on a foul by Camp Verde senior Alex Dale provided the game’s final turning point, as the Cowboys were forced to put Holbrook on the free-throw line to stop the clock. Brothers Brandon and Tyler Tapaha calmly sank four free throws in the final 36-and-a-half seconds to seal the deal and become the second Holbrook team in the Final Four.

No. 1 Valley Christian 59, No. 9 Thatcher 53: Senior forward and 3A leading scorer Caleb Shaw scored 36, including 13 of his team's 15 fourth-quarter points, to hold off upset-minded Thatcher. After the Eagles took a three-point lead early in the third quarter, Shaw drove and drew fouls to keep Thatcher at bay from the free-throw line. Little brother Luke, who finished with 11, had the only other fourth-quarter field goal after junior Thatcher center Bradley Curtis drew the Eagles to within five by the end of the period. Curtis' steal and dunk inside 1:30 to play brought Thatcher to within three, 56-53, but Shaw took control of the ball and secured the final rebound and win for the Trojans, who advance to play fifth-seeded Fountain Hills. The 6-5 Curtis finished with 20 and junior guard Brandon Napier added 17 for the Eagles, who finished the season 15-6.

No. 2 Coolidge 37, No. 7 American Leadership Academy - Gilbert North 35: Shot-faking the defender, Bears forward Josh Pratt hit just his second field goal of the game, an 18-foot jumper left of the key, with less than a second remaining to lift the Bears in a tough defensive battle with the Eagles. Six-foot, five-inch junior guard Bray Gant had 10 to lead Coolidge, while freshman guard Carlos Coronado added nine points. They both scored more in a 67-42 thrashing of 15th-seeded Monument Valley. Spencer Ferguson also had nine for the Eagles, who finished 13-7 overall after an 11-point opening-round win over No. 10 Snowflake.

No. 5 Fountain Hills 45, No. 13 Northwest Christian 28: “We’ve grown up so much,” Falcons head coach Jeffrey Bonner said, since a Jan. 25 home loss by one to Camp Verde that turned out to be the valley–and the turning point–of the Fountain Hills season. After a four-point Freedom loss at 11th seed Eastmark, the Falcons’ seven straight wins, including a 73-71 double-overtime survival of Chinle in their postseason opener, bear that out. Since the back-to-back setbacks to the Cowboys and Firebirds, Bonner has leaned on senior guard Xavier Mike and four forwards 6-foot, 3-inches tall or more. Although it took junior Aiden Logan virtually burning himself out against Chinle to make it, the strategy continued to pay dividends in the quarterfinal against the Crusaders, as the Falcons outscored the Crusaders by 16 in the final three quarters. Mike led all scorers and was the only player in double figures with 14, hitting a perfect six of six free throws in the final period to seal the Final Four berth. The only Crusader to score more than five points against the Falcons’ height was the tallest player on the floor: 6-foot, 9-inch senior Andrew Best. The rest of the team could only muster seven field goals against the Falcons’ height.

The Notes return for a bonus edition Friday, Feb. 25, to break down Northern Arizona’s 2A and 4A girls basketball semifinal results–specifically Sedona Red Rock and Flagstaff. Is this finally the year for Scorpions head coach Kirk Westervelt and Eagles head coach Tyrone Johnson to take home the big championship trophy? Tell me how you think it will go down on Facebook and Twitter at @ProfGWerner, or email me at gwerner@azpreps365.com.