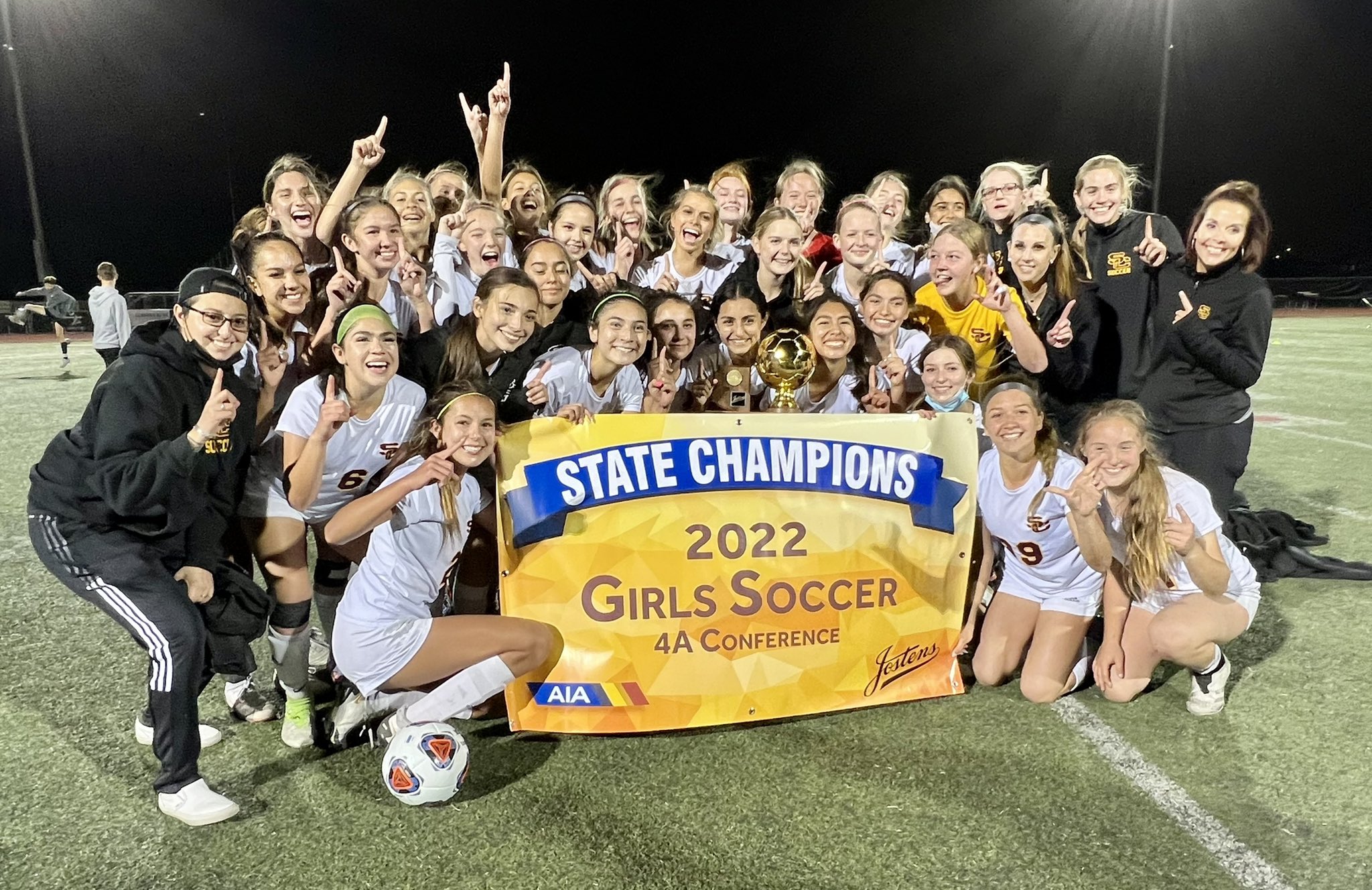 Salpointe Catholic swept through the state playoffs to bring home dual 4A state championships for both programs for the third time in four years but this year was a bit different with both squads winning on the same night, at the same place, and against the same opponent.

The Salpointe girls defeated Notre Dame Prep 4-4 (4-3) in the early game held at Williams Field High School in Gilbert Tuesday night and then the Lancer boys beat the Saints 3-1 in the late match. The two programs also won dual championships in 2019 and in 2021 but those were held on different nights and in different cities. How rare is a multiple program sweep in upper-division soccer? Catalina Foothills pulled it off in 2006 and in 2011. That’s it.

The Salpointe girls came in ranked No. 7 due to an unusual 7-1-3 record in ranking matches and Notre Dame was the top seed with a perfect 10-0 mark. The Saints dominated their opponents in ranking and playoff matches by the tune of 90 goals scored against one given up and that one goal came in a 4-1 victory over No. 16 Canyon del Oro in the first round of the playoffs.

Undaunted, Salpointe scored four goals against the Saints Tuesday night and three more in PKs. The last time the Saints gave up three or more goals was a 3-0 loss to Salpointe in the 2021 semifinals when the Lancers came in ranked No. 3 and the Saints were No. 2. Salpointe went on to defeat No. 1 Prescott 2-0 in the final.

The Saints threw the first punch on a goal from senior midfielder Ella Osmussen in the 4th minute. The Michigan State commit has 35 goals on the year, good enough for one of the top six marks in the state and her goal came during a flurry of shots in the opening moments of the match but senior keeper Madison Smith was up to the challenge for Salpointe and she came away with four saves in the first half.

Paris Mikinski lived in the air in the box. She came up big in the mix for ⁦@schsgsoccer⁩ pic.twitter.com/0RMSZkq9fT

Still, Notre Dame had all the momentum until senior Paris Mikinski scored in the box in the 35th minute to tie things up 1-1. The Saints came out of the half firing away again and sophomore forward Ella Meyer found the net in the 51st minute and then junior midfielder Halle Howe put the Saints up 3-1 in the 56th. It looked like it was game over at that point but Mikinski found herself in the mixer one more time in the 57th to cut the Saint lead down to 3-2.

The Lancers were desperate for a goal but time was running short until senior Maci Bernier lined up for a corner kick in the 79th minute. Bernier placed a perfect shot across the box where junior Rylen Bourguet leaped and headed the ball to the threads to send the match to overtime.

Sophomore Anjeli DesRosier put Salpointe up for the first time in the 85th minute but Meyer had the equalizer three minutes later. The 4-4 mark held up in the second overtime period and again in the two Golden Goal portions so the match went to kicks from the mark after 110 minutes of play.

It was the fifth title in six years for the Lancers with current head coach Kelly Pierce earning her fourth championship as a coach to go along with the two she won as a defender in 1998 and 1999. The Saints pulled off back-to-back championships in 2015 and 2016 with the 2016 victory coming over Salpointe. This was Pierce’s 99th career victory.

On the boy’s side, Wolfgang Weber added another trophy to his already crowded shelf. Weber has nine state championships with Salpointe starting in 1985 and he earned 700 career wins earlier this year. Weber is a generational coach with championships spanning 37 years.

Wolfgang Weber added to his impressive list of championships and trophies. #azpreps365 pic.twitter.com/AVUOjn3aVM

Salpointe came into the final against Notre Dame Prep with a 10-2 record in ranking matches and a No. 2 ranking and the Saints were 11-0-1 with a No. 4 ranking. Top-seeded Saguaro was knocked off by No. 8 Goldwater in the quarterfinal round and the Lancers took care of No. 3 Mohave 3-2 in the semifinal round on Saturday and Notre Dame beat Goldwater 3-1 in the other semifinal to set up the championship match Tuesday night.

The game played even until senior Sergio Ruiz de Chavez scored in the 27th minute to give Salpointe a lead the Lancers would never give up. Ruiz de Chavez left the game to rest and he came back in to put Salpointe up 2-0 in the 47th minute. The senior standout has 15 goals on the year but freshman Leo Gutierrez picked up his 29th goal on the year in the 50th minute to put Salpointe up 3-0.

Salpointe keeper Owen Lynch has seen some top competition this year so he was very prepared #azpreps365 pic.twitter.com/06iCDWlshH

Gutierrez leads all scorers from 4A, 5A and 6A and his goal against Notre Dame gave the Lancers some leverage to overcome a goal from junior midfielder Quinn Galvin in the 59th minute. The 3-1 margin held up the rest of the way.

This was the first championship final for the Saints since winning it all in 2011 and things might get more difficult for the program with the graduation of the top four scorers on the team including Kegan Lynch (16), Richard Kearney (16), Cormac Galvin (10) and Tyler Knutsen (9).

Weber gave a guarantee that he will be on the sidelines again next year and why not? Weber will lose scorers Ruiz de Chavez and Santiago Ballesteros to graduation, along with keeper Owen Lynch, but he always finds a way to reload and the has the numbers to challenge again next year.

It’s a sweep as the Salpointe boys win 3-1 https://t.co/rZtR8qBZvQ pic.twitter.com/CJHlUACbSI