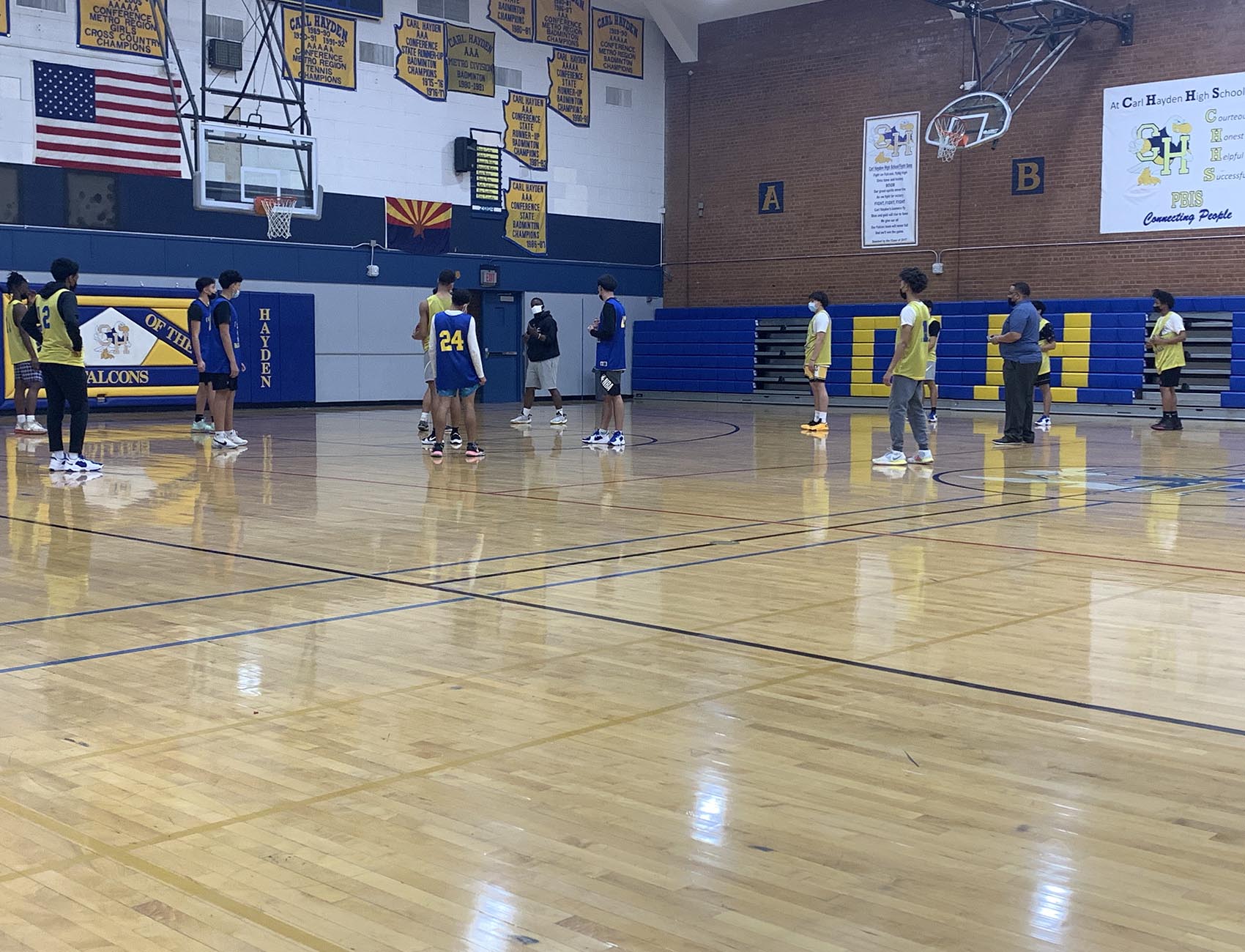 The Falcons preparing for their game against Higley in the playoffs. (Sabrina Jiles/AZPreps365)

What started off as a struggling season completely turned around for the Carl Hayden Falcons boys basketball team as they locked in and took control of their destiny.

Like most teams, the Falcons came into the 2021-2022 season with high hopes of success and bringing home a championship.

With a team filled with new talent and a will to win this season, senior Gabriel Canez believed that the team would come into the year and succeed early.

“Coming into the season I felt good. I looked at our squad and really had high hopes for us,” Canez said.

The season didn’t start off as expected, however, as the team got off to a rocky start. The Falcons lost six of their first seven games heading into the new year.

For Falcons head coach Rodney Brown, he acknowledged how the lack of a season the previous year due to COVID-19 impacted the beginning of their year.

“Us not having a season, that hurt big time. I really didn’t think that it was going to hurt as much until we got into those seven games without the tournaments,” Brown said.

Being unable to play the year prior not only gave Carl Hayden basketball less game experience together, but add new, young players with little experience playing together and there are going to be some struggles.

For senior Jordan Talbert, he described how trying to get the team to click together and focus during the beginning of the year also played a part in Carl Hayden’s early struggles.

“Most of our struggles were being locked in. Some of the players came into the game and it was like ‘oh this is my first varsity game, I made it here and I don’t have to go 100 percent’ and really it’s not like that and it showed,” Talbert said.

Even with the struggles that the team faced in the beginning of the season, the Falcons knew that something had to change if they wanted to keep their hopes of a playoff run alive.

Carl Hayden came into the new year as a new team with a will to win.

Aside from their first game in the beginning of 2022, the Falcons won seven of their eight games in the second half of the regular season.

The Falcons fought to keep their dreams of a playoff run alive, all the way down to the team’s last game of the regular season, with a buzzer beater against Central to get them in the play-in tournament. From where they started in the beginning of the year to securing the No. 24 spot in the 5A Conference to get into the playoffs, it felt like a dream to a hungry Carl Hayden team.

As one of the moments to remember, junior Adrien Armstong acknowledged the wild year that the team has had.

“The Cinderella story, we came from a terrible start then the buzzer beater to send us to the playoffs. It was just a rollercoaster of a season,” Armstong said.

The Falcons went into the play-in tournament and faced off against No. 9 Higley, who they had lost to earlier in the season. Carl Hayden was considered the underdog going into the game, but Canez embraced the team's underdog role and described it as motivation for the team.

“I love it …  we’ll take anything that we can use and then use that as motivation. We know what we can do and we know the hours we put in,” Canez said.

The team's playoff run ended as they lost to Higley 71-47, but the journey isn’t over for this Carl Hayden team.

With the bond of family established amongst the team and a foundation going into next season, a will to never give up described by sophomore Kendre Pride will continue to push them.

“The biggest thing I take away from this season is that it is never over. What we went through at the beginning of the season and just to get to where we are right now and to make a run at the state playoffs lets you know it’s never over,” Pride said.