We are in the age of the modern basketball dynasty with Page winning three of the last five 3A state championships, Seton Catholic winning five of the last seven 4A titles, Millennium winning four straight 5A trophies and Valley Vista playing for five of the last six 6A championships Wednesday night. There are many theories of why this is happening now in girls basketball but Millennium head coach Kevin Thomas credits a formula and that formula brought his program that fourth title Tuesday night in an unexpected 46-28 margin of victory over Flowing Wells.

No. 1 Flowing Wells came into Arizona Veterans Memorial Coliseum Tuesday night with a perfect 21-0 mark against teams on the power-ranking schedule and No. 3 Millennium had a little more difficulty with a 16-5 record but three of those losses came to teams from California and another came at the hands of Valley Vista. Valley Vista (19-2) is the top seed in the 6A ranks and that was a slim 42-39 setback. The fifth loss was a 71-63 overtime loss to No. 2 Sunrise Mountain three weeks ago but that defeat was erased when the Tigers returned the favor in a 48-42 victory in the 5A semifinals last week.

Millennium head coach Kevin Thomas. His second state title and the fourth in a row for the Tigers https://t.co/aPd97yejOE via @YouTube

Still, Flowing Wells opened up the championship game with a 5-0 lead in the first minute and a half. The Tiger press was not working and the formula looked like it was missing a secret ingredient. Millennium beat Flowing Wells 62-39 last year and it looked like this would be the year for the Caballeros but it was not to be. Flowing Wells started committing uncharacteristic turnovers, with many of those being of the unforced variety, and Millennium went into the locker room with a commanding 25-15 lead.

Flowing Wells finished the game with 18 turnovers and the need to press to get the ball back left the back door open for the Tigers and the team poured in 28 points in the paint. Flowing Wells went 11 minutes and 20 seconds without scoring and it looked like 15 points would be the final total for the Caballeros but the team scored 13 in the final 6:11 of the game to make it a more respectable 46-28 loss.

Leamsi Acuna made back-to-back 3-pointers in that final period to finish with 11 points on the night and Sydney Lomeli-Capen added 8 points and 8 rebounds. Navine Mallon only scored 5 points for the Caballeros but she also pulled down 15 rebounds in an obvious display of hustle and grit reserved for those give all for the team. Mallon stood alone on the court to watch each Tiger climb the ladder to cut a piece of the net down but she earned the right to stand on that floor and she plans on making a return trip next year.

Elli Guiney was the player of the game based on her 14 points and 13 rebounds for Millennium and Trayanna Crisp added 11 points. Kayda Pierce collected 7 points and 7 rebounds. Flowing Wells will lose three seniors to graduation and so will Millennium but the teams will not meet in the playoffs next year.

Millennium will remain in the 5A ranks next year but Flowing Wells is shifting to 4A and the Caballeros will be in one of the most difficult regions in the state with Pueblo, Sahuaro and Salpointe joining the team in the 4A Kino Region.

The Tigers will say goodbye to Crisp. Crisp will graduate with 1,024 career points with her 1,000th coming in the quarterfinal round. 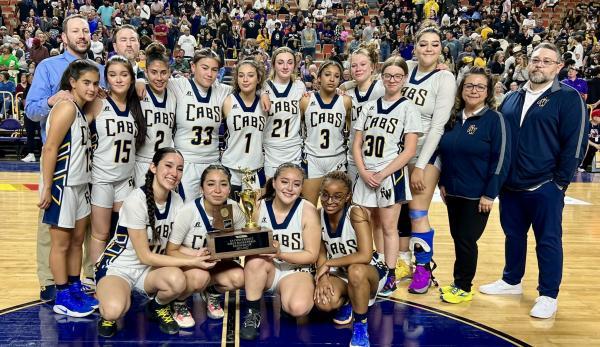