No. 20 Ironwood Ridge swept the doubles matches against No. 25 Salpointe on Tuesday to win the Division II, Section VII match 6-3. The two programs were tied 3-3 heading into doubles in the match played at the Tucson Racquet Club.

Nick Feltes and Jacob Goldman defeated Colin Spangenberg and Anthony Geile 8-0 to put the Nighthawks up 4-3 and then the last two doubles scores came in with the Nighthawks pulling out the 6-3 win.

Ironwood Ridge improved to 6-2 on the year and 2-0 in the section and Salpointe went to 3-3 overall and 1-1 in section play. No. 5 Catalina Foothills (7-0) controls the section with a 3-0 record. The Falcons have won the last seven state championships in D-II and the program is once again a heavy favorite to contend for the 16th title in school history dating back to 1997.

It's going to take some work for Ironwood Ridge and Salpointe to get into the top 16 to make the team playoffs this spring but players from the two programs are in contention for one of the 24 at-large berths for singles and doubles competition and those seeds will be decided on Saturday, April 23.

Goldman made the state tournament last year for Ironwood Ridge and his current doubles partner, Feltes, made it to the state doubles semifinal round last year when he was teamed up with Ryan Haymore.

Feltes and Goldman are now 7-0 this year and Spangenberg and Geile are 3-3.

Salpointe will visit No. 29 Canyon del Oro (5-2, 1-1) on Thursday and Ironwood Ridge hosts Catalina Foothills on the same day. 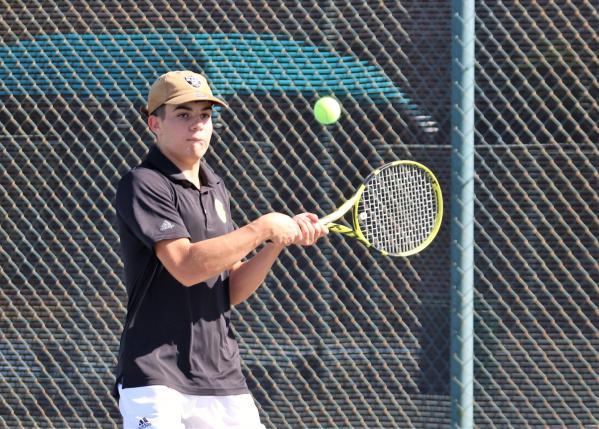