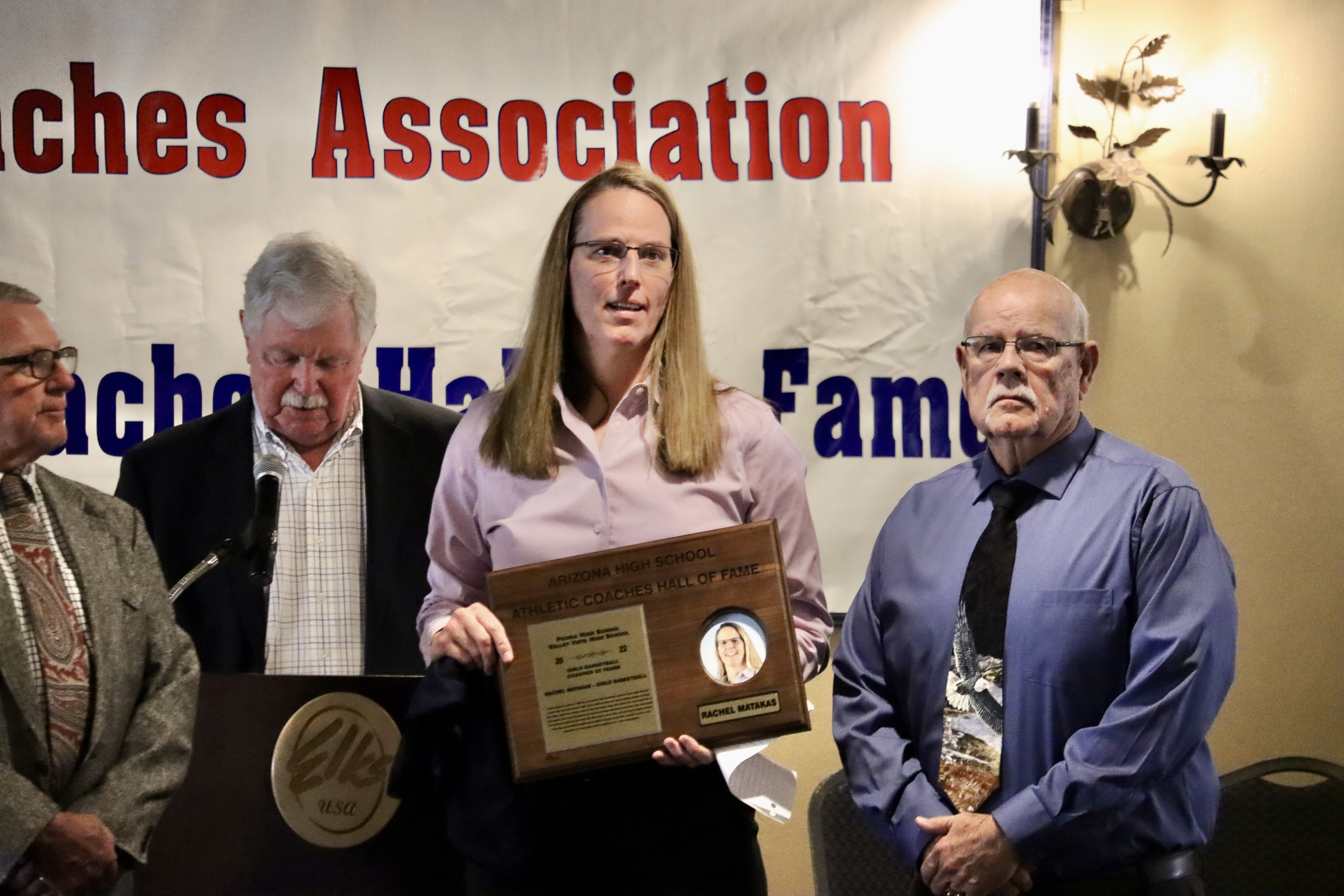 The revered quintet were honored Sunday during a ceremony in front of family, friends and colleagues at the 38th annual AZ HS Athletic Coaches Hall of Fame banquet at Phoenix Elks Lodge No. 335. Valley Vista's Matakas built a program that's won five of the last six 6A Conference basketball title games for girls.

Morgan retired last season as the state’s career leader in football wins with 349. The St. Johns High legend is battling an illness, but he was well-represented Sunday.

His sons Vince and Clint, who played for their dad, and wife Diana were present during the induction ceremony. Carlberg coached baseball at Sunnyslope, where he won 418 games. 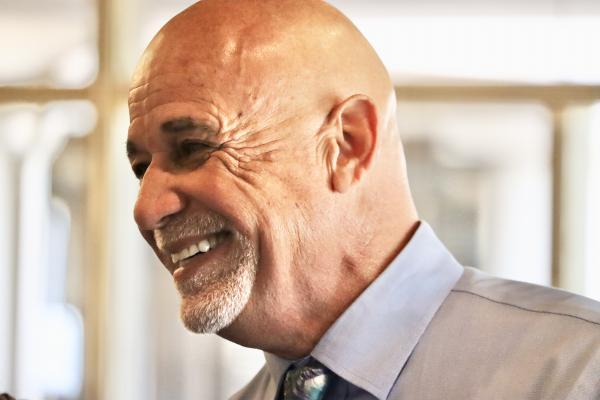 Carlberg began coaching high school baseball as an assistant coach at Coconino High School in 1976 and finished with a 24-year stint as the head coach of Sunnyslope. He had a winning percentage of 60 percent. His teams were region champs three times and won a state title in 1996. He was the Arizona State Coach of the Year twice and the National High School Athletic Coaches Association Region 8 Coach of the Year in 1996. Carlberg was inducted into the Arizona Baseball Coaches Hall of Fame in 2006 and has served the coaching profession continuously in a myriad of activities during his storied career. 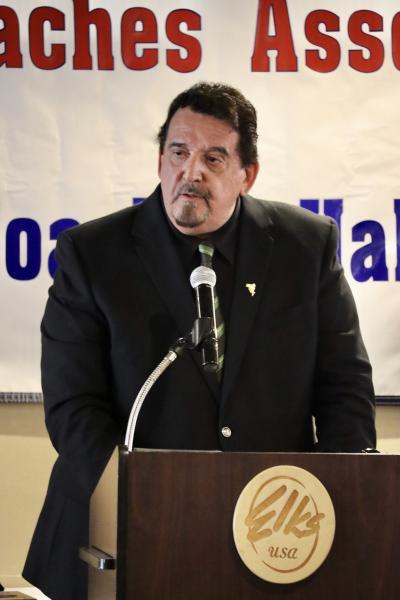 Frank spent two years as an assistant coach at Coronado and Scottsdale High School before accepting the girl’s head basketball coaching position at St. Mary’s in 1983. His teams posted a 70-plus winning percentage and won four titles in six appearances and 14 region titles. He was named the State Coach of the Year five times and Region Coach of the year 14 times. In 2007 he was honored as the Region 8 Coach of the Year by the National High School Athletic Coaches Association. He was involved in multiple professional activities during his remarkable 40-plus year career and continues coaching today at Metro Tech. 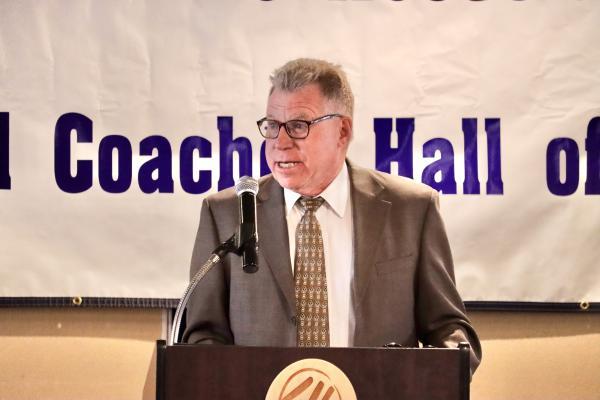 John KashnerKashner’s 20-year high school head coaching football career began at Casa Grande Union High in 1979. He accepted the head coaching position at Flowing Wells in 1988. In 1997, he was named the head coach at Coolidge. His teams posted a 50-plus winning percentage and were region champ four times. Kashner was named region Coach of the Year three times and Area Coach of the Year four times. In 1996, he served as head coach of the Arizona All-Star game and served twice as an assistant for that game. He served the coaching profession tirelessly as an officer or committee member in multiple coaching organizations, including the Arizona Interscholastic Association. 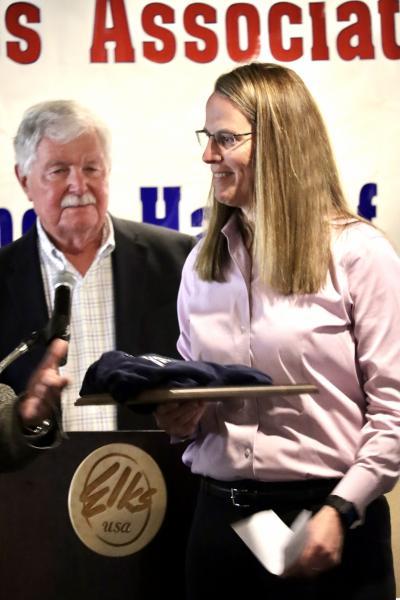 Matakas began her career in 1996 as an assistant girl’s basketball coach at Peoria High. She was named the head coach of Peoria in 2001 and moved to Valley Vista in 2006, where she is the current coach. Her teams have won nearly 70 percent of their games and won a region title nine times. She has earned region Coach of the Year honors three times and Region 8 2018 Coach of the Year by the National High School Athletic Coaches Association. Her service to the profession, community and her students is in one word unparalleled. 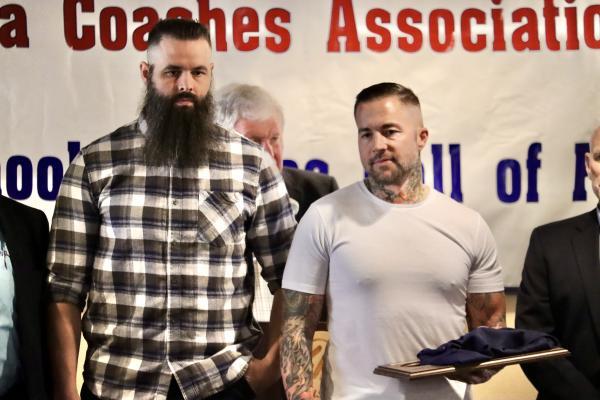 Morgan coached football in Arizona for over 40 years. He served as an assistant at Apache Junction and Chinle before becoming the head coach at Ganado High School. After seven years at Ganado, he became the head coach at St. Johns. His teams had an 80-plus winning percentage and won six titles, two runner-ups and 22 region titles. He was the National High School Athletic Coaches Association Region 8 Coach of the Year in 2018 and has been the state or region Coach of the Year 11 times.

Information for the coaches was provided by the AZ HS Athletic Coaches Hall of Fame.