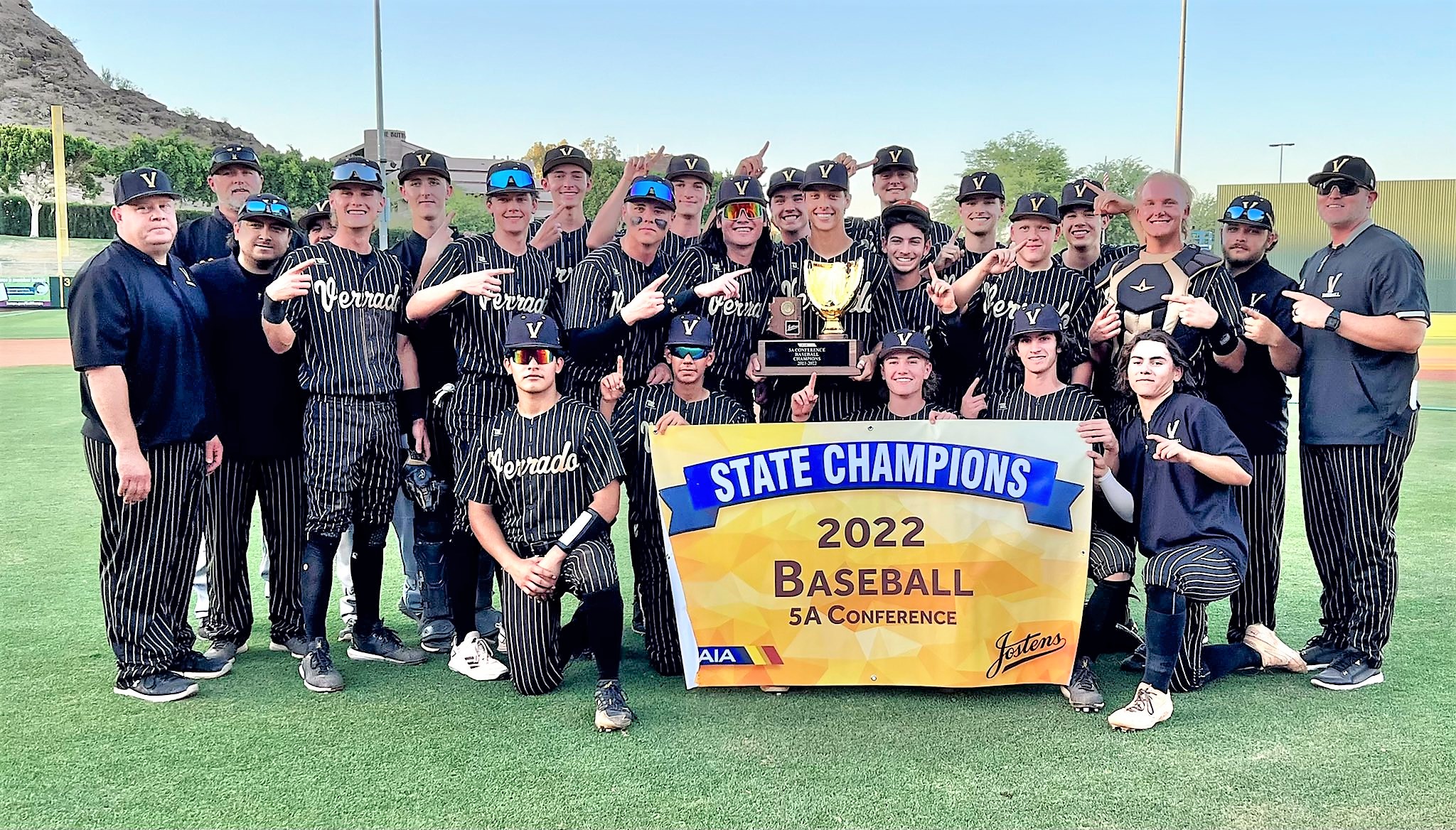 No. 3 Verrado came into the 5A state playoffs as definite underdogs to powerhouse programs like No. 2 Horizon and No. 1 Nogales but the Vipers won five straight games in 18 days to claim the first state championship in school history, including a 3-2 win over Nogales in the state final held at Diablo Stadium Tuesday night.

The team is officially known as the “Vipers” but, in reality, “Verrado” means “truth” in Spanish and that translation seems to serve the program much better these days. Leading the way was senior pitcher Joe Perez who picked up four of his seven victories in the playoffs. He had 12 strikeouts in a 3-1 win over No. 14 Marana in the first round, he added six more in a 5-1 win over No. 10 Casteel in the third round, and seven strikeouts in an epic 1-0 win over Horizon in the semifinal round. His teammate, Garrett Hicks, picked up a 3-0 win over No. 11 Catalina Foothills in the second round.

Perez was available to pitch due to the benefits of staying in the winner’s bracket, which spaced out six days between each of his starts and he ended his run with eight strikeouts against Nogales with junior Thomas Chiappetti finishing the game with Perez reaching his pitching limit.

“This squad has been amazing. They really came together from the fall on and we struggled last and we didn't play very well,” Verrado head coach Darrell Hatfield explained. “They embraced the underdog role and we didn't get a lot of respect too early. You know, we came out and they battled every day and they went to work.”

On the other side, the Apaches went undefeated in the state of Arizona before dropping a 5-3 9-inning clash with No. 9 Desert Mountain in the semifinal round. Nogales beat Desert Mountain 5-1 in the second round to send the Wolves to elimination bracket and the team battled back with two victories before beating Nogales. The loss forced an “if game” in the double-elimination format and the Apaches rebounded with a 5-3 win to set up the championship with Verrado.

The game was scoreless until Verrado plated one in the top of the fourth inning on an RBI double from Brenden Velez. Nogales went up 2-1 in the bottom half of the inning on an RBI from Thomas Teel and a run issued to Alan Durazo on a passed ball later in the inning. Verrado went up for good on back-to-back sacrifice flies from Brendan Killeen and Hicks in the fifth. A walk and error set up the inning for the Vipers.

“Unfortunately things didn't go our way today and it wasn't because of a lack of effort,” Favela said. “These guys put their hearts into every moment together. Unfortunately we didn't finish the deal and that was one of their goals to be the best ever. This is one of the hardest working groups I've ever had. It was a really close group of kids. And the seniors took a lot of those kids under their wings. If those kids take to heart what the seniors showed out there, then there's not going to be very much of a knockoff next year.”