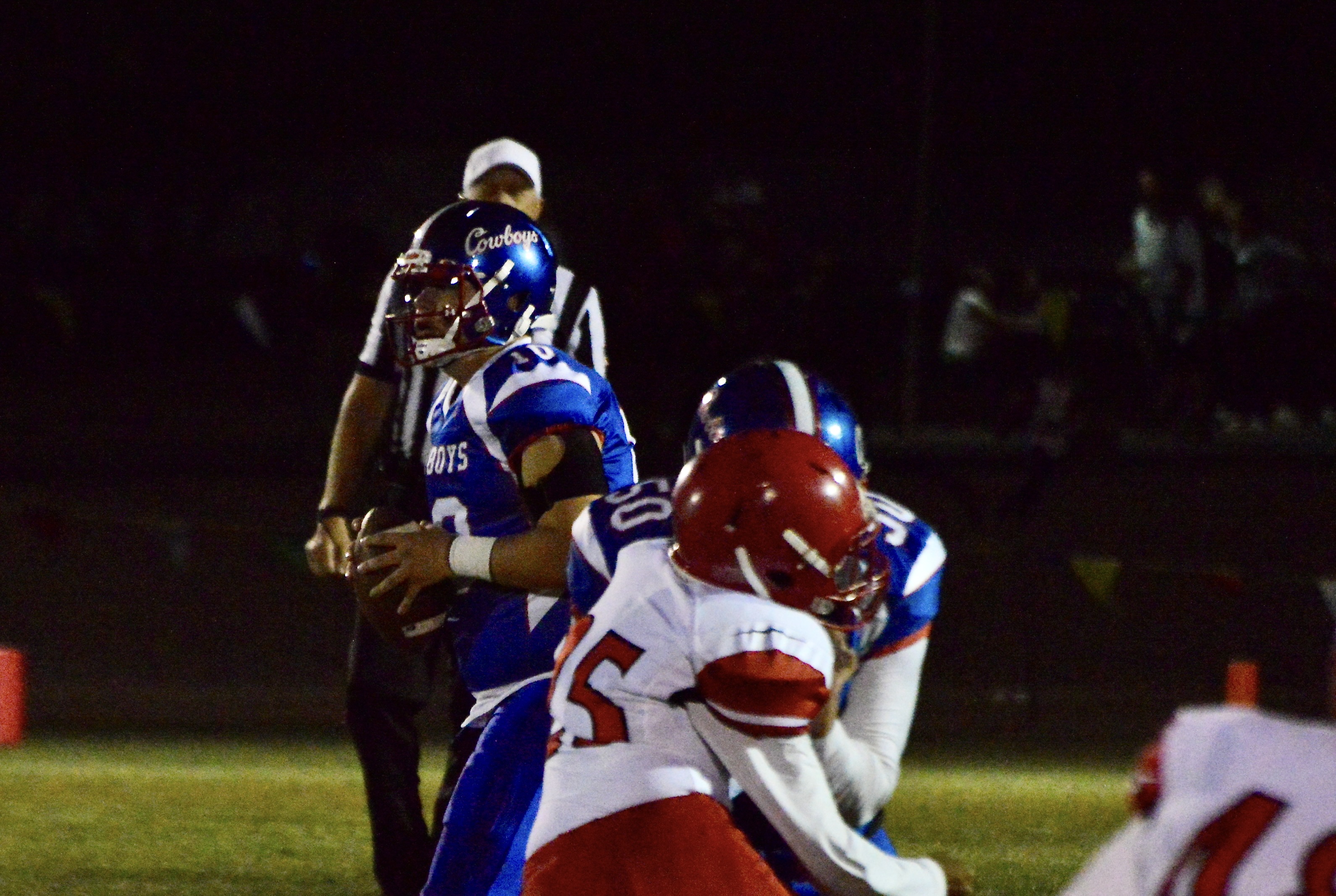 Camp Verde quarterback Tyson Buckley (10) looks downfield to throw the ball against Red Mesa on Friday, Sept. 9, 2022, in Camp Verde. The 6-foot-3, 240-pound junior threw five touchdown passes in the first half against the Redskins in a 62-0 win. (Brian M. Bergner Jr./AzPreps365)

Buckley’s five touchdown passes all came in the first half for the Cowboys (3-0, 0-0 2A Agua Fria), which are coming off an 8-3 campaign a season ago that saw them make the state playoffs, but lose 28-0 to St. Johns in round one.

Despite nursing a shoulder injury he suffered during a 48-34 victory over Scottsdale Prep. Academy in Week 3, the 6-foot-3, 240-pound junior quarterback helped Camp Verde take a 48-0 lead by halftime, allowing the team to rest him in the second half.

“He worked hard to get back this week. He took a few hits last week, like I said, Scottsdale Prep. is a real good team. That was a tough physical team,” first-year Camp Verde head coach Aaron Gronwald said. “We got him out for the second half, but the kid is tough, he’s a baller.”

Buckley added that it was a “big win” for the Cowboys.

“We knew coming into this game that we had to play perfect. I think we came out here and played perfect,” Buckley said.

Buckley now has 15 touchdown passes on the season and is likely over 1,000 yards passing after just three games. He came into Friday’s contest having completed 43 of 62 passes for 739 yards with a QBR of 135.7.

With state playoff talk already circulating the team, Buckley said the players and coaches aren’t worried about the year as a whole, but they are taking a game-by-game approach.

Gronwald said he loves what he’s seeing early on from his quarterback and receiver tandem.

“Their personalities are huge. The biggest thing for them that I like that they’re still both juniors, so there’s a little bit of immaturity when it comes to focus at practice, or at games, but that’s one thing they’re adding bricks to every week,” Gronwald said. “That focus, that understanding. They’re both leaders.”

As for the “brick-by-brick” mantra, Gronwald said it’s something they live by as a team.

“Our motto this year is brick-by-brick. And we’re just talking about putting another one on. You want to be a championship program, everything you’re doing is looking toward the playoffs. And we just added another brick tonight, and that’s all a testament to the kids,” Gronwald said. 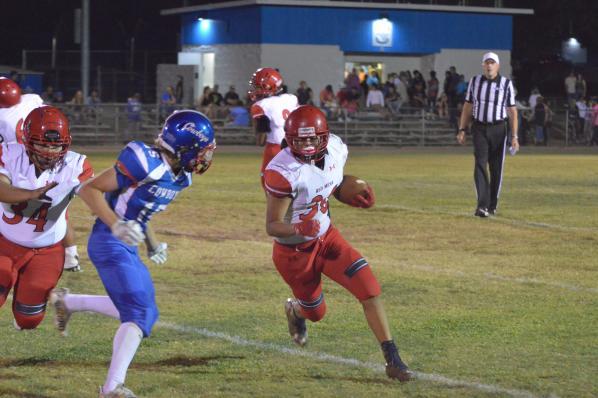 Camp Verde opened the night’s scoring with 6:22 left in the first quarter after Buckley found Williams on an 8-yard touchdown throw to take a 7-0 lead.

On Red Mesa’s next possession, Cowboys’ linebacker Chase Gillespie intercepted a Gage Wolf throw, setting up a Buckley-to-Sanabria 20-yard strike to make it 14-0.

Williams made it 21-0 on a 33-yard touchdown run before later scoring in the second quarter on a 37-yard touchdown scamper to put Camp Verde up 35-0 with 7:06 to play in the first half and they never looked back.

“We asked a lot of our guys, we set some high goals for tonight. A perfect game. Nobody to play perfect as an individual, but a perfect game. Under 125 yards [offense]. Interceptions, positive turnover differential, all of those things. Just trying to clean up our game,” Gronwald said.

Defensively, it is the first shutout for the Cowboys since the 2018 season when they blanked Valley Lutheran 34-0 on Sept. 14 that year.

The Cowboys are scheduled to travel to Trivium Prep. (2-2, 1-0 2A Hassayampa) on Friday, Sept. 16. The Crimson Knights beat NFL Yet College Prep. 70-16 on Thursday night.

After Friday’s loss to Camp Verde, the Redskins have been outscored 166-14 so far this season.

Kickoff against Holbrook is set for 7 p.m.