The balancing act of Max Pincus 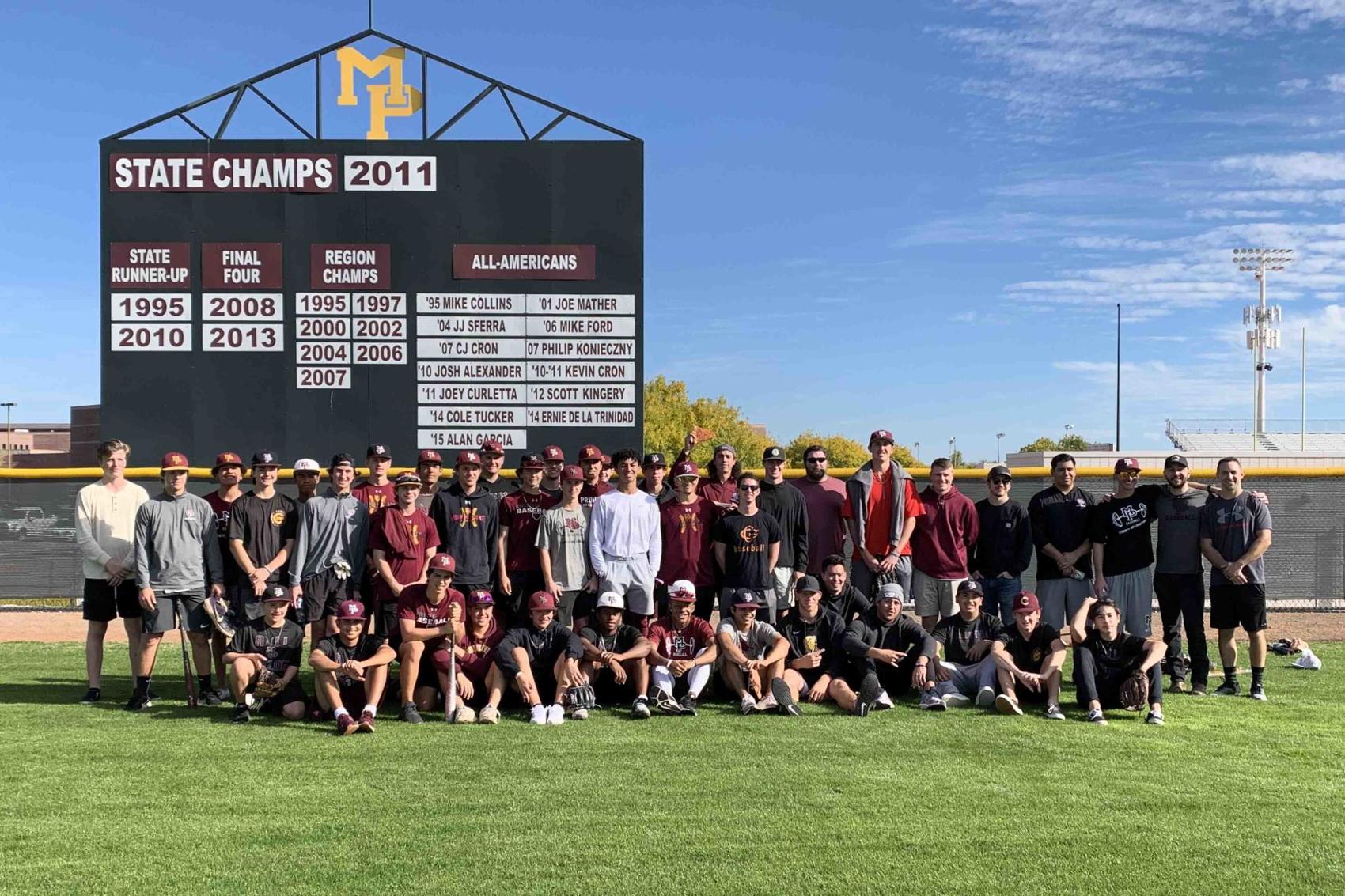 Mountain Pointe baseball alumni, including Max Pincus, standing in front of the records board (photo/mtpbaseball.com)

TEMPE, Ariz.-- To be the head coach of a team at any level, it means you are the most trusted person in the program, to develop and unlock the potential of your players. For many, being the head coach of one team is a life’s achievement.

For Max Pincus, one is not enough.

Pincus is the head coach of Mountain Pointe High School's baseball and girl’s golf teams. He has been with the baseball team for 15 years now and with the girls golf team for seven.

After eight years in the baseball program, Pincus was asked to help out with the golf team while the former coach was on paternity leave.

“That coach ended up moving schools, and that’s when I kind of stepped in," Pincus said. “It wasn’t something that I necessarily came out looking to do, but it’s been something I’ve enjoyed.”

Luckily for Pincus, the two sports do not overlap much in season. He described that the dead period of the year for baseball happens to be right in the heart of golf season. Throwing for the boys doesn’t pick up for a few more weeks, and by that time the golf season will have almost wrapped up.

On another level, the difference between coaching boys baseball and girls golf is quite a large one, at least in the minds of many.

However, Pincus sees it through a different lens.

“Kids are kids, and sports are sports. Having good kids that work hard and compete, and a lot of the other stuff works itself out,” he said. “I’ve got good assistants around me, helping with golf swings, and on the baseball field.”

He also believes the games are more similar than one may think.

“Both are games of failure. You fail seven out of 10 times in baseball, you're a hall of famer. Golf is all about controlling your misses and emotions,” Pincus said.

One wrinkle to add to the already uncommon situation is how many of Pincus’ boys from the baseball team actually play for the boys golf team. Along with this, the relationship between the Pincus and Tony Ramseyer, the boy's golf coach, still goes deeper.

“I actually had him as my math teacher about 17 years ago, he’s a great leader,” Pincus said about Ramseyer.

Ramseyer has actually named one of the members of the baseball team, Teagan Kearney, senior captain for his team this season. He has also spoken very highly of his senior class this year, many of which are included on the Pride’s baseball team as well.

“Our seniors lead by example. I’m much more of a facilitator, trying to manage the team, so it’s important to have those experienced players," Ramseyer said.

Ashlyn Pongratz, a junior for Pincus’ girls team, was quick to mention the balancing act her coach does between the two seasons.

“I feel like he balances it really well,” Pongratz said. "He still makes us feel important and makes time for us.”

Pongratz also mentioned the similarities between the two sports potentially overlapping in his coaching, with swing planes of motions being on relatively similar fronts.

“He’s not hard, but he’s still motivating,” she said, “he’s just relaxed, and that makes a much more calm environment that definitely helps us perform better.”

The addition of another head coaching job to the already very full plate of Pincus’ life, ended up being the cherry on top of his coaching world.