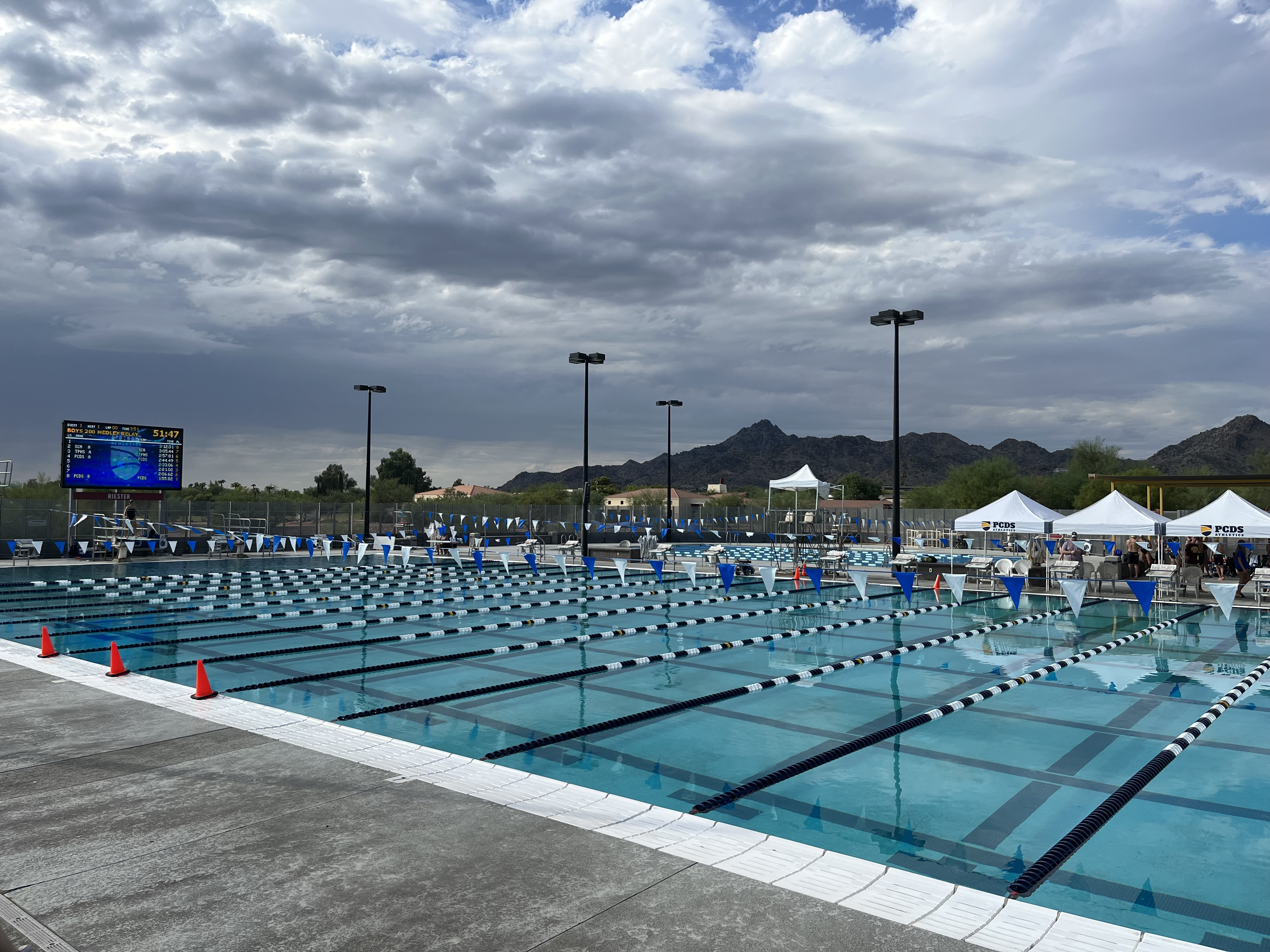 A look over Phoenix Country Day's pool before the start of Tuesday's meet. (Erin Patterson photo/AZPreps365)

The Tempe Prep swim team may not have come out on top Tuesday, but their teamwork and dedication shone through.

“It was so awesome,” TPA coach Maria Zello said. “The girls really came together. I’m pretty impressed that they chose to continue with the relay, persevere through that injury and find somebody to sub for her.”

Waddell swam in the girls 200 medley relay, the 200 IM, the 100 breaststroke and the 400 freestyle relay. In the 400 relay, Waddell swam alongside senior Naomi Palmer, sophomore Maeve Waddell and sophomore Lillian Henderson. The relay ended up placing fourth with a time of 5:30.17.

“I feel like since I’m an upperclassman I have to jump in more and not just wait for Maria to tell me to get up there,” Waddell said. “To volunteer and notice that someone is hurt is something that is really important.”

“Sometimes people are nervous and don’t want to be in the relay so it’s definitely really great to see somebody step in, especially for an injury,” Youngs said, “I’m just really proud of my teammate.”

“I had the 50 fly leg in the 200 medley,” Youngs said, “I’ve never swam butterfly but it felt pretty good. In my 50 freestyle and 100 freestyle, they haven’t been my best times but I’m only two seconds off my PR from last year so that’s pretty good for it being only the beginning of the season.”

The other two personal records set were in the girls 200 freestyle relay A team and senior Jonas Santini in the boys 50 freestyle. Santini swam a 29.39, and not only was the time a personal best but was also the first time he went sub-30 this season.

“That was really a big achievement for him this year and was probably our most exciting race of the meet,” Zello said.

The girls 200 freestyle relay was swam by sophomore Stella Andersson, sophomore Autumn Evdokimo, senior Naomi Palmer and senior Sofie Youngs. The team finished second overall in the race with a new PR of 2:06.98.