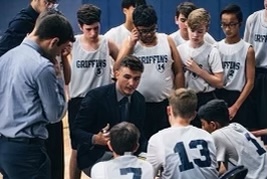 The big challenge for the 20-year-old Hawkins is balancing his job and academic responsibilities.

“Something that helps [me the most] is writing things out that needed to be done,” said Hawkins. “And almost creating a checklist of my day.”

“I don’t know what I would be doing now [if] I didn’t learn from Jerome Garrison,” said Hawkins. “He did a great job pouring it into me [and] learning what it means to build an athletic culture and what it means to strive for excellence.”

Hawkins plans to use what he learned under Garrison and expand within the program.

Sports run through the Hawkins family. His father, Matt, played baseball and his mother, Nicole, played volleyball and basketball. Hawkins played basketball, football, baseball and cross-country in high school but basketball was his favorite.

“Growing up, me and my siblings, we all played sports all the time,” said Hawkins. “But basketball is probably our family sport.”

Glendale Prep boys varsity assistant coach and junior varsity head coach Noah Roundy was one of Hawkins' former basketball teammates in high school and got to know him as a player and coach. He believes it helped Hawkins' transition to being the interim athletic director.

“He was just a hard worker,” said Roundy. “I (could) tell even at a younger age for him he was a leader.”

After graduating from Glendale Prep in 2020,  Hawkins attended community college before moving on to Grand Canyon University as a sports business major.

“[Matthew] kind of had to figure out what it was that (he wanted) to study,'' said Nicole Hawkins. “ ... He gave himself a little time to figure that out.”

He is on track to graduate in the spring semester of 2023.

Hawkins did find something to do during that time as he started off as assistant athletic director for Glendale Prep in 2021 and then worked his way to getting the interim athletic director job. Hawkins got support from his family, friends, coaches, headmaster, administration team and district AD.

“It starts with my fiance, it starts with family being there and supporting me in every area of my life,” said Hawkins. “And then it goes to our parent community at GP. It’s phenomenal with the volunteer and support they have for us.”