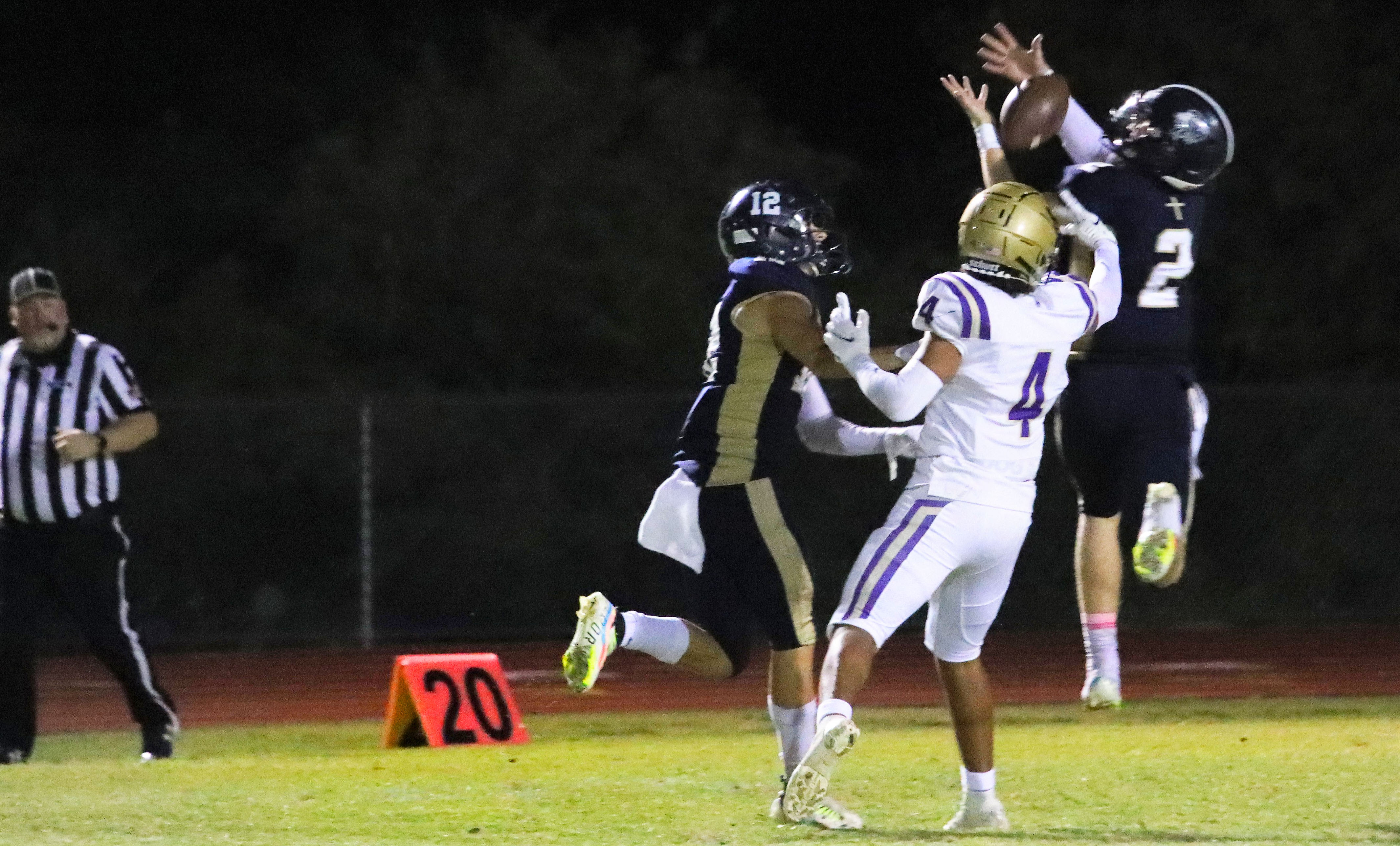 Bubba Mustain is a quarterback by trade but he also roams centerfield for the Pusch Ridge defense. Life in the 3A Conference means playing both ways and that’s what happens when your team only lists 29 jerseys on the roster. The Lions held an almost improbable 34-20 lead over Sabino at home Friday night but there was still time on the clock in the fourth quarter – too much time.

The Sabercats drove down to the 17, ready to cut the lead down to one score, but Mustain pulled down an interception in the end zone to end the threat with 10:09 left in the game. It was his third interception of the night. Still, there was too much time left on the clock, and Sabino is known for battling to end, but the night belonged to the Pusch Ridge line. The Lions took nine minutes off the clock on the next drive and Brysen Barrios ended the game with a 3-yard dash to give Pusch Ridge a 41-20 victory.

Pusch Ridge improved to 5-1 on the year with the loss coming last Friday at Thatcher. Actually Friday and Saturday. That game was suspended Friday night due to weather and the Lions were forced to drive back from Oro Valley to Thatcher on Saturday night to finish it. Thatcher came away with a 28-14 win but it also meant one less practice session to prepare for Sabino. Sabino (5-1) on the other hand, clobbered Safford 68-14 at home.

Thatcher (6-0) is the top-ranked 3A team in the state for a reason and Eagles compete in the 3A South Region along with No. 3 Pusch Ridge, No. 5 Sabino and No.10 Benson (4-2). It’s simply the most difficult region in the conference with some of the best athletes in the state regardless of classification.

Mustain ended the night with 102 yards passing (12-16) with two TDs to go along with his three interceptions. He also rushed for 34 yards with another score. He led the Lions down the field to open the game and he hit Cody Rafacz from 20 yards out for an early 6-0 lead with the missed extra point. The Sabercats answered right away and Andres Baca cashed in on a short run to take a 7-6 lead with 4:59 left in the quarter.

Barrios had 170 yards rushing on 31 carries and he scored the first of his touchdowns in the opening seconds of the second quarter on a 10-yards dash to put the Lions up 12-7 with a failed 2-point attempt. Sabino answered with a 54-yard strike from Cam Hackworth to Shamar Berryhill to take a 13-12 lead with Barrios blocking the extra point.

Hackworth threw for 221 yards (15-32) with 2 TDs and Berryhill had 6 catches for 113 yards and 2 TDs. Berryhill’s second TD catch came after a fumble from the Lions and Hackworth found him from 10 yards out to go up 20-12 with 5:56 left in the half. Pusch Ridge went on an 80-yard drive with Mustain taking the ball the final yard to tie the game 20-20 at the half thanks to a 2-point run from Barrios.

Mustain came up with his first interception on the Sabercats first drive from the locker room and Barrios made it 27-20 with 6:53 left in the third on a 2-yard run. Mustain picked up his second interception three plays later and he hit his brother Tyler Mustain from 14 yards out for the 34-20 lead.

Shamar Berryhill is one of the biggest weapons in the state, as is his brother Savaughn Berryhill. Savaughn pulled in 84 yards on 6 catches. Their older brother, Stanley Berryhill III, signed with the Phoenix Cardinals’ practice squad on Sept. 20.

Sabino will host Sequoia Pathway (2-3) next week before ending the regular season at No. 2 Eastmark (5-1), at Thatcher and then Benson at home. There will be plenty of power-points in those games to keep the Sabercats in the top five down the stretch.

Pusch Ridge hosts No. 6 Valley Christian (6-1) in two weeks after a bye next Friday. A trip to Palo Verde (2-4) and Safford (1-5) at home ends the regular season. The win over Sabino should help the Lions weather the potential loss of power-points in the last two games and the program needs to pull for the Sabercats to do well.