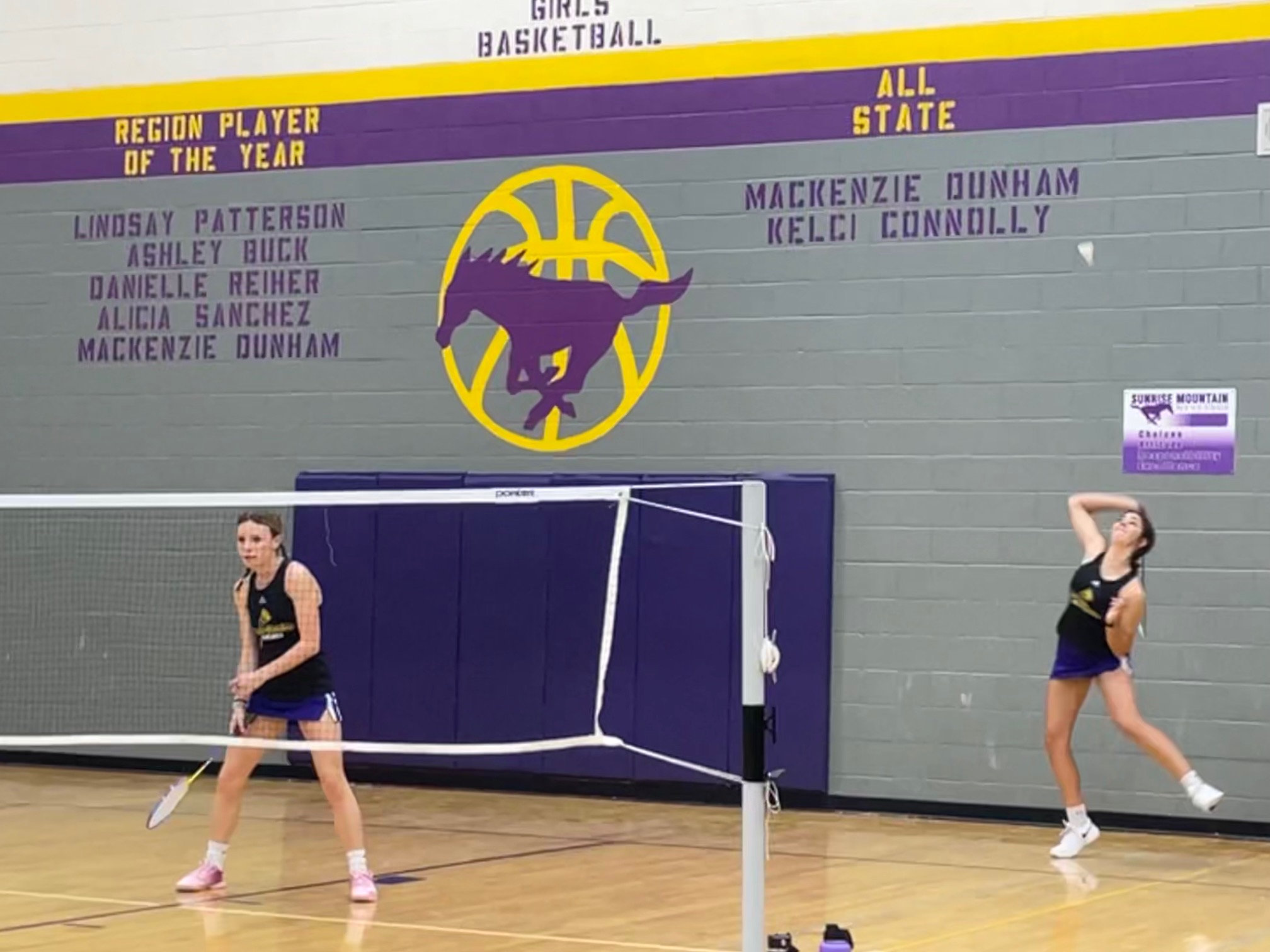 The combination of Rylan Rhodes (left), and Hattie Hearnen (right) was a force to be reckoned with Tuesday in Peoria. (Brenden Paul/AZPreps365)

As for the match, the Mustangs made sure to put on a show for their home supporters, as the team played well across the board. At No. 1 singles, Rylan Rhodes played two fantastic sets en route to an easy 2-0 match win against Raymond S. Kellis’ Angelic Williams (21-10, 21-6).

Hearnen had equal success as she was dominant throughout her sets, earning the 2-0 sweep easily over Zharria Range (21-4, 21-13).

Martin started off hot with an easy first-set win 21-10 but dropped the second set 22-20 in heartbreaking fashion. Martin was able to finish strong and came out on top with a big 21-7 win in the decisive third set.

“I think adjusting to who I’m playing, and using the adjustments coach made for me was key to my game today,” Martin said. “Down the road, I think I can work on adjusting myself during the game without having someone to tell me.”

Junior Hannah Winschel had a strong showing as she won her two singles sets with ease (21-7, 21-6).

“I think focusing and thinking about where I’m going to hit the birdie, and playing to my opponent’s weaknesses were key for me today,” Winschel said. “In doubles, communication was key. Camille and I were a lot louder and we really clicked today.”

Sophomore Ruthey Figg found similar success as she defeated Stephanie Carreon with a convincing performance in her two set victories (21-3, 21-14). Senior Annabel Johnson closed out singles with a bang, as she took care of Laisha Gallindo in two sets with back-to-back 21-6 victories.

The #2 doubles pair of Martin and Winschel put on a clinic as they followed in Rhodes and Hearnen’s footsteps with a convincing 2-0 sweep (21-4, 21-13).

Finally, at #3 doubles, Johnson and Dinnell took control of their match early and never wavered as they earned a dominant 2-0 sweep (21-3, 21-11), and completed the overall 9-0 match sweep for Sunrise Mountain.

Head coach Missy Carter said she was pleased with what she saw in the match.

“I think the team is starting to use the tools we teach them in practice, and they’re becoming second nature, rather than them having to remember them,” Carter said. “I think over the next few weeks we’re going to do some fitness. Some repetitive things, like practicing our serves, and making sure we are practicing those good shots. Just trying to make sure these things become second nature and the players don’t have to think about it.”

The Mustangs have just over two weeks to prepare for the state tournament, which will begin on Friday, Oct. 21.