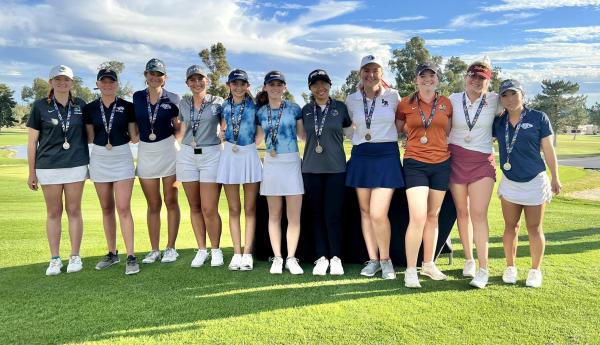 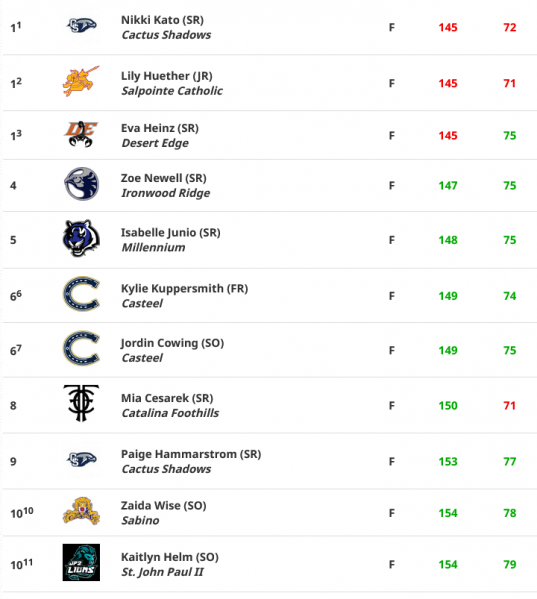 There were five lead changes at some point during the second round of the Division II state tournament held Tuesday at the Omni Tucson National with Cactus Shadows standout Nikki Kato moving up and down the leaderboard several times along with Desert Edge senior Eva Heinz, Salpointe junior Lily Huether, Ironwood Ridge senior Zoe Newell and Millennium senior Isabelle Junio. The field was so fluid and unpredictable that the tournament wasn’t decided until Kato outlasted Heinz and Huether in a two-hole playoff.

Heinz led the field by two strokes after the first round on the 73-par Catalina Course with a 3-under 70 and Newell followed with a 72. Kato and Junio were even heading into day two and Huether was 1-over. Heinz shot an uncharacteristic double bogey on the ninth hole and Huether lost a shot on the 15th to open the door for Kato down the stretch and all three came in with a 1-under 145 to force a three-way playoff.

Kato and Heinz shot even on the first playoff hole (Catalina 1) and Huether came up one shot short to force the second playoff hole between Kato and Heinz. Kato’s approach shot on the 18th landed about three feet from the flag and she putted in for the win. Huether and Heinze tied for second place.

As a team, Kato’s putt on the 18th in regulation gave Cactus Shadows a 629 to 630 victory over Casteel. The victory is No. 8 for Cactus Shadows which is the most by any other team besides the 37 won by Xavier Prep. The Falcons won three in a row from 2016 to 2018 and that was followed by back-back-runner up finishes to Ironwood Ridge and a third place spot last year behind Ironwood Ridge and Salpointe. This is head coach Mark O’Bryan’s fourth state title with Cactus Shadows.

This is the highest finish for Casteel and Salpointe took third place (655). The D-II boys get underway on Wednesday on the Sonoran Course at the Omni Tucson National with the final day schedule for Thursday.