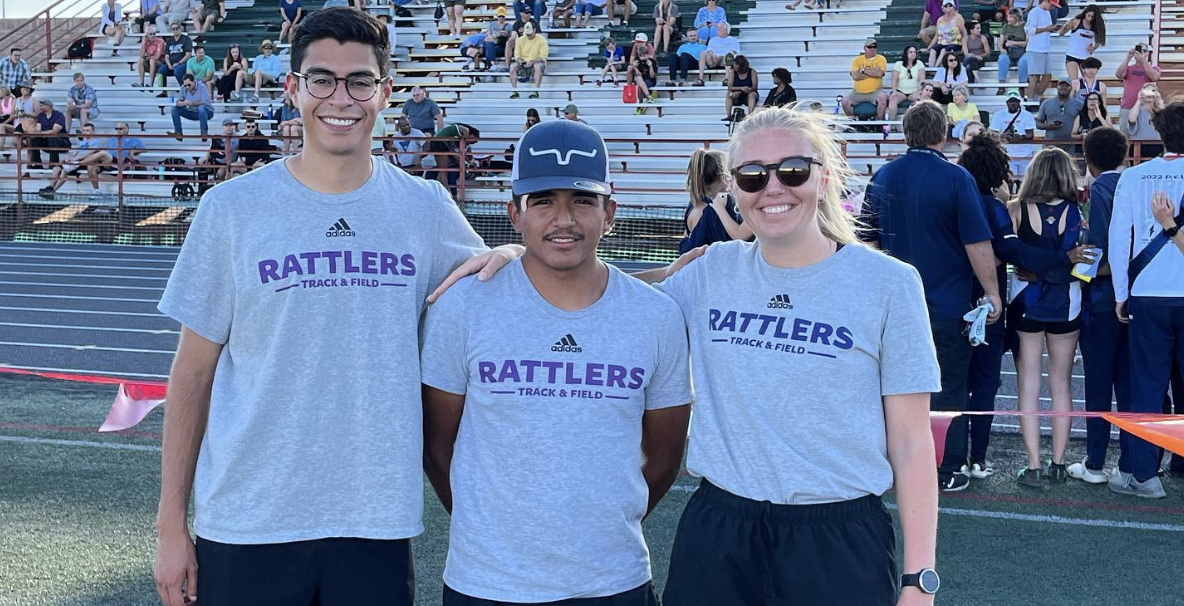 Daniel and Kenzie Flores never expected to be head coaches so soon after college.

Yet, just two years after graduating from Grand Canyon University, the Floreses were referred to North Canyon High School and subsequently hired as the head cross-country coaches and head distance coaches for the track and field team.

“One of our teammates from both [Glendale Community College] and GCU went to North Canyon, and he reached out because he said that North Canyon needed a cross-country coach and a distance track coach,” Daniel Flores said. “So he’s the one that actually got us connected to [head track and field coaches] coach [Airabin Justin] and coach Jason [Martin] at North Canyon.”

Following their introduction, the Floreses were hired. Their first season as coaches was the 2021 track and field season. Having graduated from GCU in 2019, Daniel and Kenzie were just two years removed from their own running careers.

Despite where they are now, there was a time when neither one of them cared for running as much as they do now. Both athletes began to shift their focus from other sports once they realized they had the potential to go far in track and cross-country.

“I did cross-country all four years and not very seriously because I was playing soccer, and I started running in order to be in shape for soccer season, and then I didn’t start track until my junior year, and that’s when I started getting more serious about running,” Daniel Flores said. “I never thought about running in a serious way. Soccer was my whole life until that point. My senior year was when I started seeing a lot of improvement in cross-country and then in track also, so just when I started seeing that improvement…That was my motivation.”

While Daniel’s transition from soccer to running at Ironwood High School was a bit more natural, Kenzie received a substantial push to run in both the fall and spring seasons when her volleyball coach at Cactus High School left after her sophomore year.

“I ran track all four years of high school, not super seriously my freshman and sophomore year because I was on the volleyball team, and that was really my main concern, but my junior year is when I started running cross-country,” Kenzie Flores said.

“The real thing that happened was my volleyball coach in high school left my junior year when I was planning on still being on the team. A new coach came in, and my track coach had been hounding me, ‘Come on. Come join the cross-country team. Come join the cross-country team,’ and I always said, ‘No, no, I have volleyball going on,’ and then it just so happened that the volleyball coach left, and he had been begging me…”

With both athletes able to focus on running in the fall and the spring, they began to see even more improvement in their times. Their success led both of their coaches to encourage them to try competing at the next level.

Through connections with former Glendale Community College head coach Randy Espinoza, both athletes found their home away from home at GCC.

In two years at GCC, both athletes found their own versions of success. During her time as a Gaucho, Kenzie was named Second Team All-ACCAC. Daniel reached even further heights, being named a Track & Field and Cross Country NJCAA All-American.

With two prosperous years at GCC under their belts, the Floreses ran out of eligibility at the junior college level. In order to continue running, they’d have to find another perfect match. According to Kenzie, GCU had a lot of favorable qualities that encouraged her to make the switch.

“That [decision] was a lot more meticulous,” Flores said. “A lot more planning went into that one. I was definitely looking to compete at a higher level, and one thing that was really cool about GCU at that point was that was going to be their first year of being officially in the Division I space, so that was super exciting to be a part of a program that had just become Division I eligible.

“A big part for me was it was local. I wasn’t really interested in moving too far away from my home and my family…and I was very excited that it was a Christian university, and I got to meet the coach who was a female coach, which is something fairly new in Division I sports and the running world, so that was really exciting to me, and she was great.”

From there, Daniel and Kenzie wasted no time settling in. According to them, it wasn’t much different competing at the Division I level instead of the junior college level.

Once he got to GCU, Daniel expanded on his GCC success. In his first year as a Lope, he broke the school’s record in the 1500-meter run while also landing at third all-time in the 800m.

“I didn’t feel like it was a huge transition,” Flores said. “I think we were prepared fairly well by our coach at GCC just with the meets that we went to, the training that we had. I think that’s what contributed to us having a pretty good transition. It was fairly similar training and just a few little modifications, so at least personally, I didn’t feel like it was that huge of a difference, thankfully.”

His solid foundation from GCC allowed him to build even higher in his senior year. He moved up to second all-time for the 800m and earned podium finishes in the Western Athletic Conference Cross Country Championship and both the Indoor and Outdoor WAC Championships for track and field. His performances earned him the honor of All-WAC.

Following graduation, neither Daniel nor Kenzie had seriously considered coaching until the position at North Canyon opened up. Since then, the two have been all-in.

One of the most significant positives of coaching at the high school level for Daniel and Kenzie, especially at such a young age, is their ability to connect with the athletes. North Canyon athletic director Comfort Beene noted this quality as something that continues to make the Floreses an asset to the Rattler staff.

“[Daniel and Kenzie] are truly invested in the most professional mature way possible,” Beene said. “Their athletes truly listen to them. They look to them for direction…[The athletes] are truly invested in that encouragement, but also their skill because obviously, [Daniel and Kenzie] just graduated, so their still in it almost, and it’s so good when you have coaches that are still in it…It’s a little bit different when the athletes can see their coaches doing what they’re doing. They go, ‘Oh ok. I’m more bought in. I’m all in,’ but again, they are great coaches. They’re great as a team…”

As their first cross-country season with North Canyon wraps up, the Floreses hope to see their athletes finish strong, potentially seeing a pair of their runners qualify for the AIA State Championship meet.