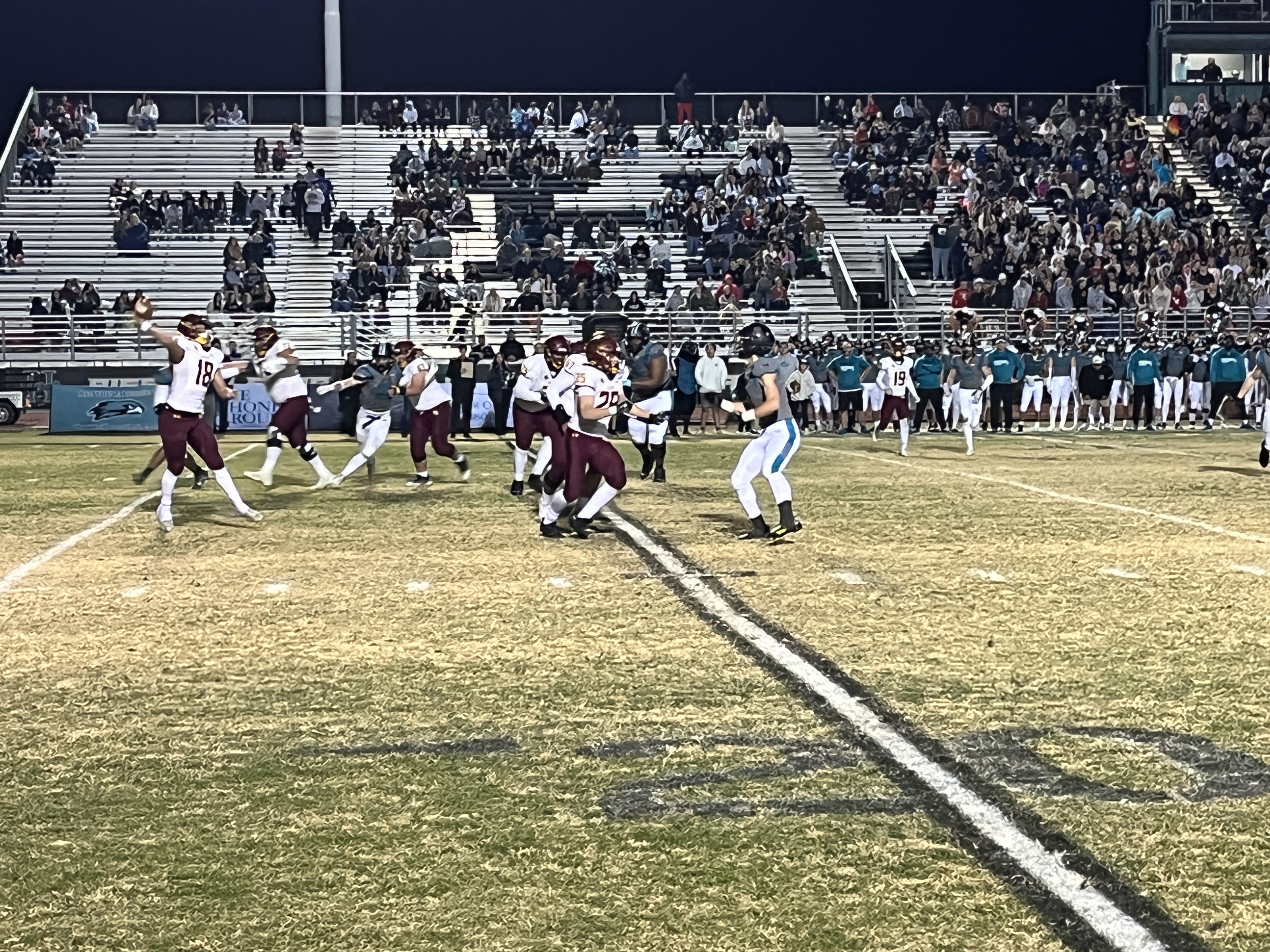 Highland defends Salpointe quarterback Fredo Sotelo (18) in the first half its 14-10 quarterfinal win on Friday. (Azpreps365.com)

Trying to defend a championship isn't always pretty. Just ask the Highland Hawks as they endeavor to claim back-to-back 6A football titles.

#2 Highland scored a touchdown on its opening drive of the second half on Friday night and made that score stand up for a 14-10 triumph over #7 Salpointe Catholic at Highland High.

Highland (9-3) advances to the semifinals to host #6 Red Mountain next Friday (Nov. 2) at 7 p.m. Red Mountain devoured #14 Mesa, 49-10, in its quarterfinal contest. Salpointe finished the season 7-5. Highland and Red Mountain played three weeks ago with Highland claiming a 17-14 victory.

The game-winning score for Highland was set up by an interception in the first two minutes of the third period. The Hawks used five plays to drive 28 yards for the lead. Junior Kody Cullimore, a two-way standout, scored both his team's TDs. His 8-yard run at the 8:38 mark of the third erased a 10-7 halftime deficit. Cullimore tallied the game's first TD on an 11-yard run, capping a five-play, 37-yard drive. It was set up by a long kickoff return by Alexander Falagrady.

Highland's defense pitched a shutout in the second half. Salpointe advanced into Highland territory once after intermission and that was only to the Hawks 45 in the third quarter. Salpointe's two fourth-quarter possessions ended with an interception (Cullimore) and a a punt from its own territory. Hawks defensive end Cooper Scott posted a sack of Salpointe quarterback Fredo Sotelo, the key play in thwarting the Lancers' final possession.

"This was a game we had to find a way," Highland coach Brock Farrel said. "It was an ugly win. Ugly wins still advance you in the playoffs."

Salpointe answered Highland's early first-quarter TD with 1:09 left in the quarter. A quarterback sneak by Sotelo evened things at 7. Salpointe's final points come via a Carson Fiske 34-yard field goal at the 8:03 mark the second quarter. It put the Lancers up 10-7, a lead it took to halftime.

Neither team wowed on offense with Highland winning the yardage battle for the night, 236-189. Highland limited Salpointe to 86 rushing on 27 attempts and 103 passing. Highland did better on the ground 169 yards on 35 rushes plus 67 yards passing.