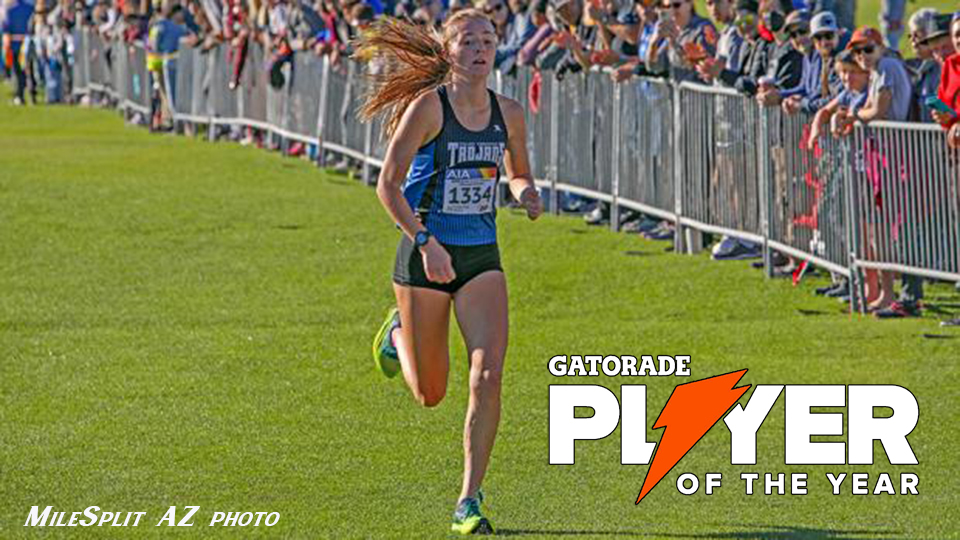 The state’s three-time returning Gatorade Player of the Year as a former student at Desert Vista High School, the 5-foot-10 senior raced to the Division 4 individual state championship this past season with a time of 17:53.2, leading the Trojans to fourth place as a team. Ping also won the Fountain Hills Invitational, finished eighth at the Desert Twilight Festival and took 19th at the Champs Sports West Regional Championships.

Ping has volunteered locally at Project Gold Running Camp and also participated in a school service project in which students volunteer at local churches. “Following three years of winning state titles in the highest classification in the state, Lauren Ping elevated to another division and captured a fourth career cross country championship in her first season as a student at Valley Christian,” said Erik Boal, an editor at DyeStat.com. “Her victory added to one of the most remarkable resumes in Arizona prep distance running history.”

Ping has maintained a 3.44 GPA in the classroom. She has signed a National Letter of Intent to run on scholarship at Oklahoma State University this fall.

Gatorade has a long-standing history of serving athlete communities and understands how sports instill valuable lifelong skills on and off the field. Through Gatorade’s “Play it Forward” platform, Middleton has the opportunity to award a $1,000 grant to a local or national organization of their choosing that helps young athletes realize the benefits of playing sports. Middleton is also eligible to submit a short video explaining why the organization they chose is deserving of one of twelve $10,000 spotlight grants, which will be announced throughout the year. To date, Gatorade Player of the Year winners’ grants have totaled more than $3.5 million across more than 1,300 organizations.

Since the program’s inception in 1985, Gatorade Player of the Year award recipients have won hundreds of professional and college championships, and many have also turned into pillars in their communities, becoming coaches, business owners and educators.

To learn more about the Gatorade Player of the Year program, check out past winners or to nominate studentathletes, visit playeroftheyear.gatorade.com or follow us on social media on Facebook at facebook.com/GatoradePOY, Instagram at instagram.com/Gatorade and Twitter at twitter.com/Gatorade.