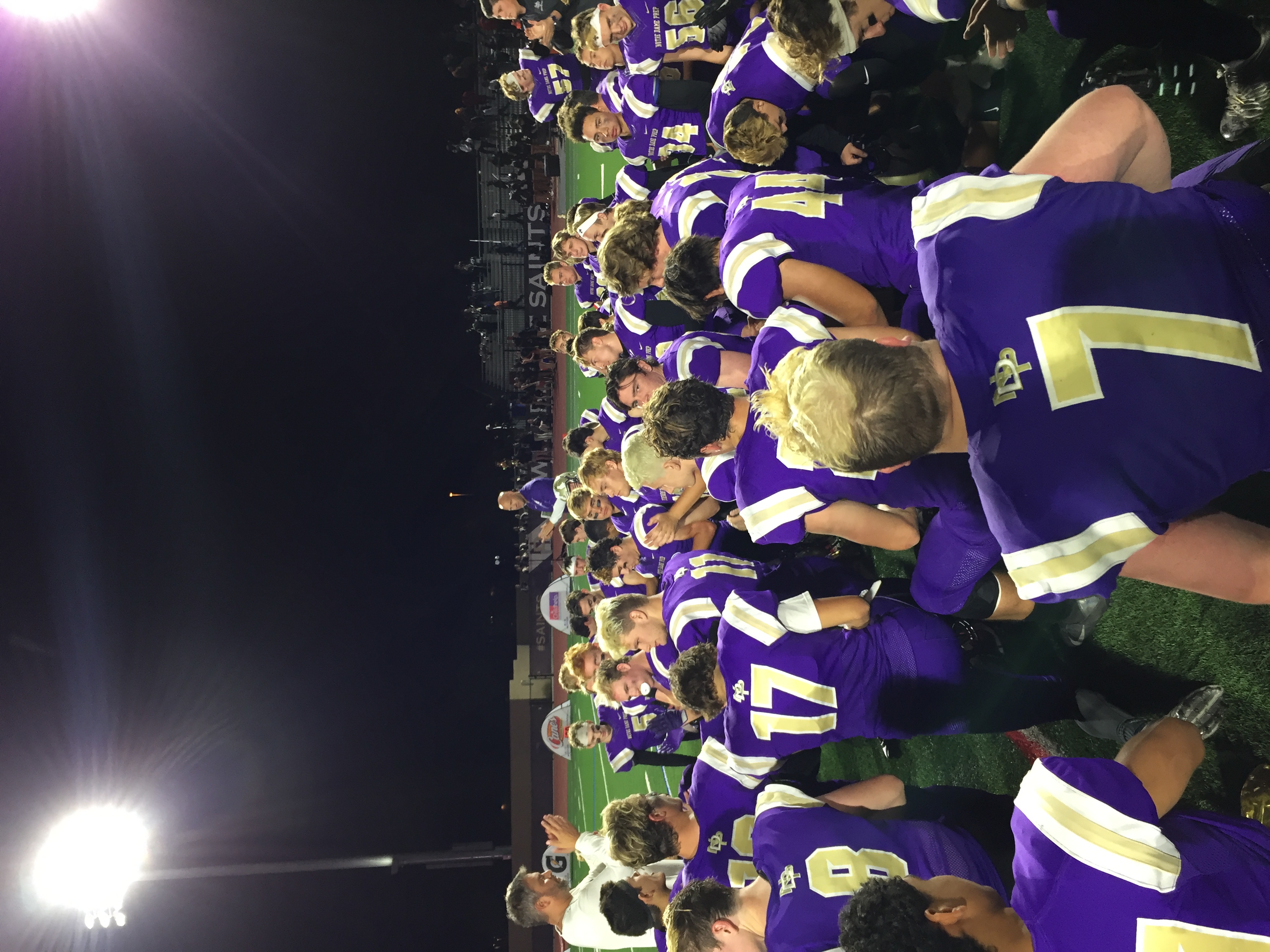 In their first matchup of the 2017 season, the Saints from Notre Dame Prep and the Scorpions of Desert Edge took a thrilling contest into overtime where the Saints would ultimately prevail in what could be considered one of the better matchups of the year. Friday night’s playoff rematch, however, wrote a much different script.

The Saints handled the Scorpions decisively 49-7 in front of a large crowd at Notre Dame Prep, who turned out to see the Saints in their first playoff action in five years.

Notre Dame wasted no time giving the fans what they came for, scoring early and often as quarterback Kylan Weisser, who was 7-of-12 for 221 yards and four touchdowns on the night, sent two touchdown passes of 31 and 36 yards on consecutive drives, each to tight end Harrison Copoloff, putting the Saints up 14-0 with just under four and a half minutes still to play in the first quarter.

But it wasn’t until the Saints’ third offensive possession when it became clear that the night would belong to Notre Dame.

On the first play of the drive, Weisser sent a long pass downfield which deflected off the hands of a Scorpion defensive back and into the waiting arms of Saints receiver Jake Smith, who galloped in stride 81 yards to the house, giving Notre Dame the 21-0 advantage as time expired in the first quarter.

Ultimately, simple fortune had nothing to do with the Saints victory on Friday, as Notre Dame outscored the Desert Edge 28-7 the rest of the way, dominating all three facets of the game and cruising their way to the second round.

Next to the play of Weisser, Notre Dame was led offensively, as they have been all year, by senior running back and 1,000-yard rusher Cole Fisher, who carried the ball 18 times, for 105 yards and two touchdowns, highlighting a Saints offensive charge which gashed the Scorpions defense for 409 yards.

“(Fisher’s) a team-first player,” said Saints head coach George Prelock. “He did a great job, the O-line did a great job. We were able to pick up some keys in terms of what they were doing, and we ran the ball where we thought we could have some strength. Cole always does a great job running the ball and he was able to take advantage of it and he played great, I couldn’t be prouder of him.”

Defensively, the Saints, who came into Friday’s ball game conceding just 17 points and 207 yards per game, looked just as strong, allowing just 221 yards to Desert Edge, 150 of those from Scorpion running back Rocky Perez, who came in among the top 10 rushers in 5A, and one touchdown, while forcing the Scorpions into three turnovers on the evening.

“Those kids love each other, they play for the guy next to them,” said Prelock of his defense. “In the beginning, Desert Edge did a great job, they were getting five, six yards a pop. But thankfully we were able to make some adjustments, we made some big tackles, and some key plays and it was great.”

The victory marks the 11th for the Saints this season, the most for any Saints team since 2010, and the first playoff victory for the program since 2011, a result that Fisher says is of the unique closeness of his team.

“Definitely the bond we have,” said Fisher on what makes this team special. “A lot of us have known each other and played together since sixth grade year. Eighth grade year, we all made the decision to come here and we knew it would be a process. We’d have to wait until senior year and that’s when we were going to be great, and that’s what we’re trying to do.”

The Saints will now look ahead to next week when the Bulldogs from Queen Creek, who were victorious over Mountain View 48-20 on Friday, travel out to Scottsdale for the quarterfinals of the AIA football playoffs.

The fifth-ranked Bulldogs largely cruised through the 2017 regular season campaign, going 10-1 and outscoring opponents 349-164, and figure to present a challenge for the Saints. But for Prelock and his team, they prefer to control only what they can and keep the focus simple.

“Get better, it’s as simple as that, we have got to continue to get better,” said Prelock. “The state’s blessed to have a lot of good coaches and I’m blessed to play against them because it makes me better and makes everyone better. So, we’re really looking forward to the opportunity and the challenge next week.”