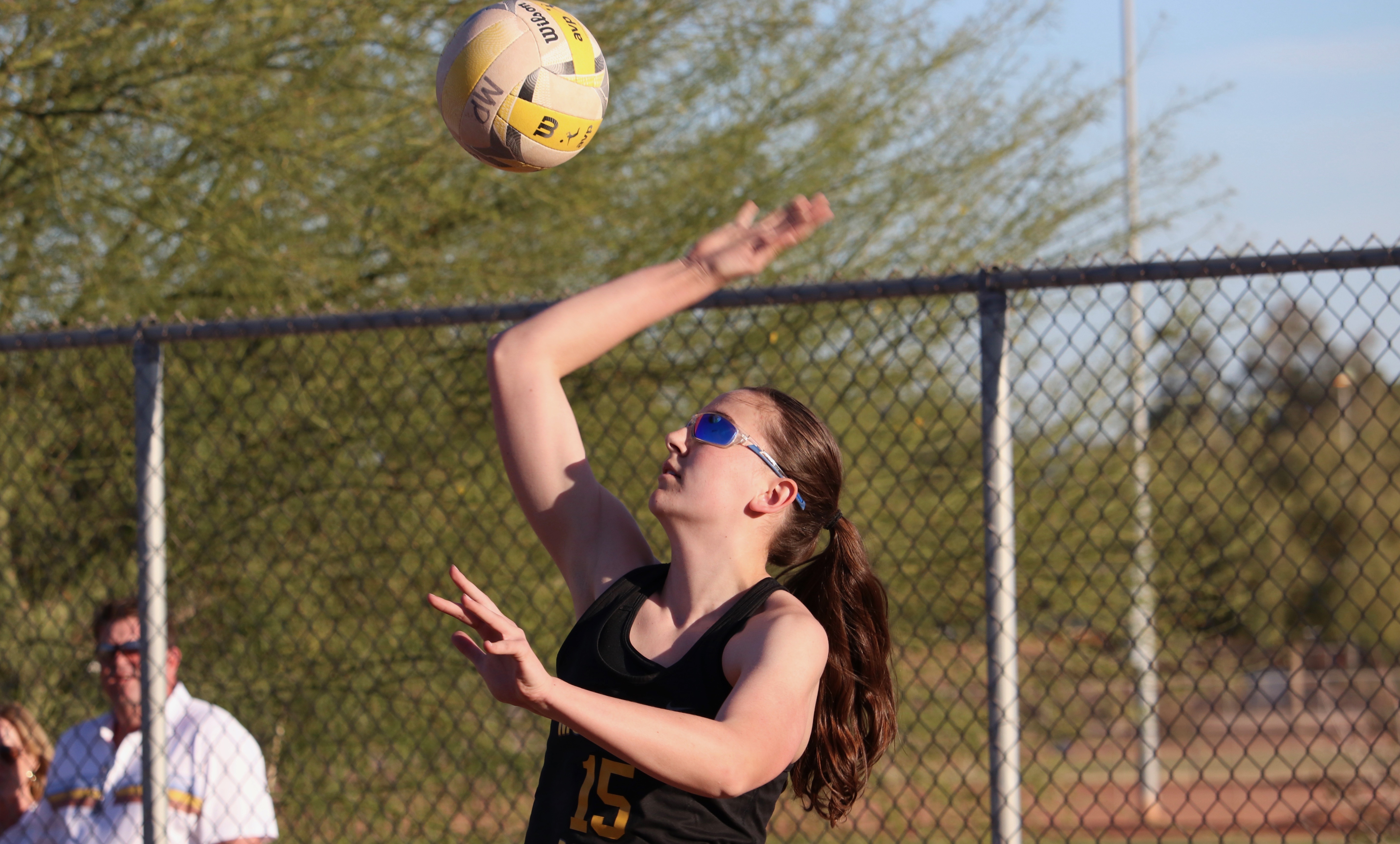 Both of these sand programs are currently in their second Division I seasons and each featured a young roster with few upperclassmen in the ranks. Due to the recent establishment of the sport in Arizona, this match was the first time these opponents faced off as AIA competitors.

MPHS junior Avery Luoma said playing the growing sport is fun because it allows her to continue play after the indoor season ends. The flip side to the less popular outdoor version is that it’s difficult to gauge opponents, and the only opportunity to do so comes during warmups.

The MPHS duo of Anna Jackson and Avery Turk opened play and suffered the Pride’s only loss of the match. After winning the first set 21-11, the Pride fell to the Jaguars' pair of Anijarae Birdow and Lauren Milnor in the two consecutive sets that followed.

However, Mountain Pointe dominated the courts from then on, with all four wins decided by two sets each.

“I thought they played really well today,” Mountain Pointe first-year head coach Bill Pincus said. “We were missing several key players, and for them to come together and give a solid performance, I feel pretty good.”

The MPHS pair of Bria Samilton and Jahara Campbell set the tone after handing the Jaguars their first loss. Their teammates Mara Meehan and Desiray Armstrong followed suit in a tightly-contested duel, in which they prevailed with a 21-11, 21-17 victory over the Jaguars.

Next up was the MPHS duo of Piper Manross and Bri Lopez, who clinched the match and put the Pride up by three points.

The junior and senior MPHS pair of Luoma and Sarah Van Horn defeated BCHS duo Taylor Pratt and Justine Thompson in the first set, and then sealed the Pride’s victory with a 12-point win in the second set.

“I saw a lot of great hustle plays,” Green said. “The girl’s worked really hard and got a lot of touches. We’re a young team with a lot of potential, so I’m excited for our future.”

Even with a winning record, Pincus said establishing consistency has been a difficult aspect of the season thus far. The majority of his roster leaves early from practices and games because they also compete on club teams outside of school.

“I think we’re a talented team when we get our whole team here,” Pincus said. “We still have yet to do that, and we have more matches this week when we’re going to be missing three or four of our best players.”

Pincus said ending the conflicting schedules between outdoor and indoor volleyball will happen once beach volleyball’s popularity grows enough to give players the freedom to choose between the two.

“It’s still just such a young sport, so it’s going to take a number of years before that happens,” Pincus said. “Eventually we will have beach-only players, and that’s what it’s all about.”